We had a super fun 4th of July weekend. We're just a little late in reporting so :)

On the 2nd, we went swimming and then walked through the path behind our apartments to NARA park where Acton was throwing it's big holiday party. They had really yummy free hot dogs and we brought along some chips and watermelon for dinner. 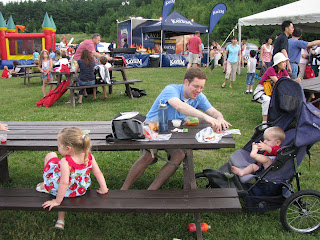 We chatted with some friends from church who live in our town and wandered around the little carnival area they had. Then we walked back home and bathed the kids and put them in jammies. 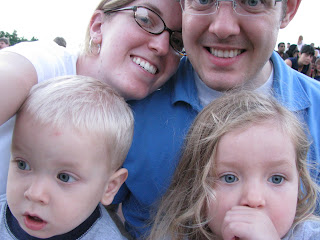 The US Air Force band from our area played all the traditional 4th songs, some show tunes, and of course this one since it's Boston. It was fun to watch Levi as he experienced fireworks for the first time after the show. As we herded out with everyone through the narrow path in the woods, we remarked that we'd never been in such a large mass of people moving all to the same place and that it was pretty surreal.

The third was church of course. Anna wore her patriotic dress from Grandma Becky and we got so many comments on how adorable she was, especially with her "flag bows" from Kathy. (Thanks to both of you!) After nap time we made this flag cake and sang happy birthday to America and blew out candles, much to Anna's delight. 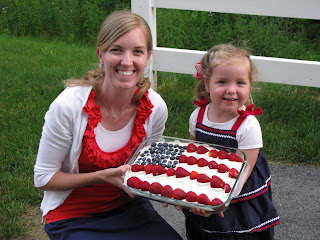 (By the way, I made that red shirt out of two tank tops I got for $1.50 each at Target and it's one of my new favorite tops. I also made my skirt- without a pattern = not recommended- for the family pictures we took in April {I should probably post those...} and although it turned out a little funky, it looks just how I'd hoped when I wear it. Hooray for sewing success!) 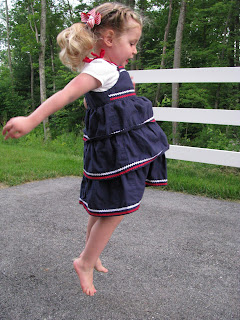 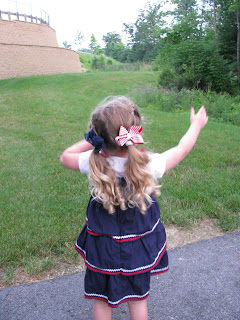 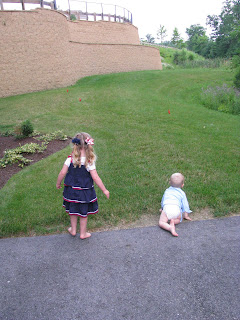 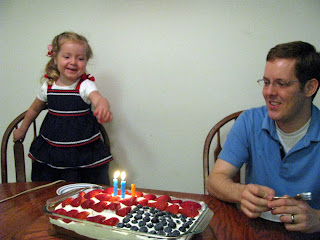 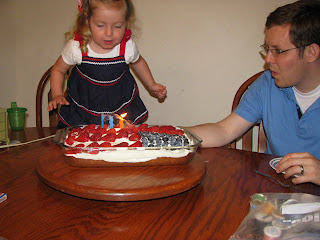 For the 4th, I really wanted to go downtown and see the Boston Pops and the fireworks over the river. With Sam's internship and work schedule, we might not actually be in Boston for the 4th again, so I was anxious to do it this year. Sam humored me and we left after breakfast. We parked at the end of the line and took the train downtown. Once we got there we found out you couldn't see the fireworks from the lawn in front of the Hatch Shell where the Pops play (which was never mentioned on the website....grr) so we found a spot on The Esplanade under a tree where we could see a screen showing the concert as well as the fireworks barge in the river. We staked out a large spot with our blankets and strollers and wished we hadn't come so early :)

We ate some lunch there and then wandered over to Boston Common where we listened to music, watched the swan boats and played on the playground. The day was really hot and humid though, and the splash pad just looked too good to resist, so after snapping this picture of the dress I made for Anna from one of Sam's old shirts... 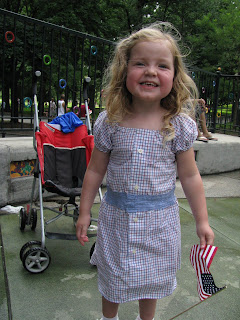 (I made the under-arm waaay too small, so if we ever have another girl, it'll make a cute 2T dress)

...we stripped Anna down to her undies and Levi to his diaper and let them at it. Levi, who we woke up from a nap to play, wasn't too excited about and mostly stayed on the edges by mom splashing his hands in little puddles, but Anna was simply giddy and raced in and out of the water. 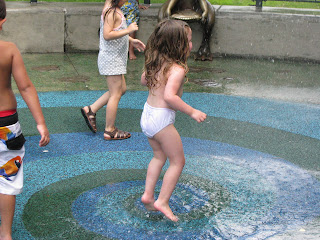 Once playtime was done, we changed the kids into dry clothes and got some ice cream at the PACKED McDonald's across the street from the park and waited forever for the bathroom so we wouldn't have to use the port-a-potties on the Esplanade. But, we did enjoy the air conditioning for a while :)

We walked back to our spot and I took Levi for a walk hoping he might fall asleep again while Sam did some coloring with Anna. The Esplanade was starting to fill up a little more, and the kids were getting tired, so this period of time is a bit of blur, but eventually we headed back up to McDonald's for some dinner and some more AC before going back to the splash pad/playground to play. We had to be back on the Esplanade by 8 PM when they closed the bridges so we left around 7 and followed the crowd out there. By the time we got back to our seats, every little piece of grass was covered. Someone had even squeezed in the 2 ft patch of dirt between our blanket and the back of a bench 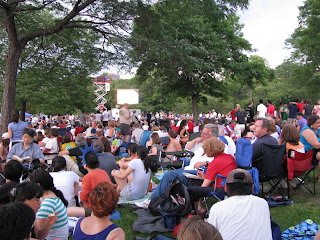 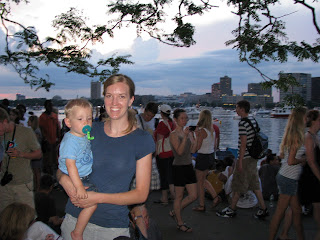 proof we brought Levi, and that he was exhausted 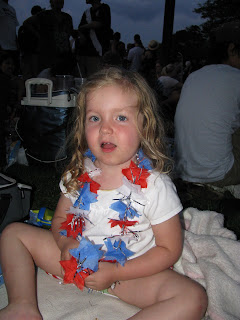 our neighbors under the tree gave Anna this star necklace 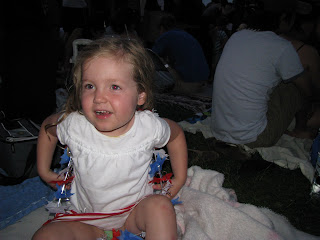 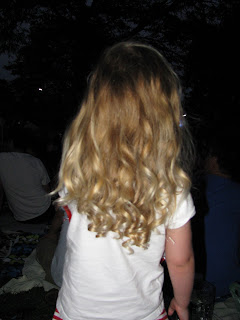 have I mentioned yet how much I love her hair?

Pretty soon though, the concert started and we had fun dancing to the music. The kids were absolutely worn out by this time, and alternated between crazy happiness, meltdowns, and sprawling with their blankets. Here's what I mean:

I eventually put Levi in his stroller and he fell asleep in the middle of the cannon-booming 1812 Overture. Anna decided she needed to use the potty right as Neil Diamond's America started playing, but I managed a few fist pumps while tip-toeing through the crowd praying Anna wouldn't tinkle on anyone.

Finally the fireworks show started and it was, hands down, the best I have ever seen. They had all sorts of kinds I'd never seen before, and many had multiple effects like changing colors or bursting in different places. Some of my favorites were shot off during "Fireflies" and were these little golden flares that floated up and down and looked like they were flying. And of course they played Katy Perry, like every other fireworks show in the universe this year. Right in the middle of the show, Anna, amazingly, fell asleep.

After the show we got the kids in the strollers and found out how wrong we'd been about the large crowds on Saturday night. The number of people there was insane. We finally made it to the train station to find a giant mass of people at the door. We knew we'd never get to the front of a huge crowd, so we walked over the bridge to the Kendall station by MIT. There, we hopped on the elevator and jumped straight to the front of the line, but we still waited through 2 trains and a conductor forced everyone else to wait while we got on with the strollers.

We made it home around 1:30 AM, all exhausted and Sam having to go to school in the morning, but as I thanked him profusely for coming with me, I could honestly say I was glad we did it.
Posted by heather at 9:31 AM

Props to you for braving the crowds for the 4th. I wish we had done the same . . . Micah's office is located right on the river where the fireworks were this year and we could have gone up on the roof to watch the fireworks. Some of our friends did and said it was amazing. But Micah didn't want to and I didn't push him. I should have. Next year I'll be more insistent.

We went last year with Greg and hauled food and chairs, neither of which we needed because he had bought tickets at the marina. Tim's kids sat in the boats right on the river. You cannot beat Boston Pops and fireworks.

Those are the most gorgeous natural curls. I hope that she gets to keep those her entire life!

Elisabeth-
You certainly know a thing or two about gorgeous natural curls :)

One of my life goals is to see the fireworks/Boston Pops.

Wow, what a day! Glad you were able to brave it all and just do it!