The weekend after we moved here, Sam's work had an employee day at a small local amusement park called Canobie Lake Park. It only cost $20 for all 4 of us to go and included a surprisingly good lunch of burgers, bbq chicken, corn, watermelon, and ice cream. Anna, however, didn't eat anything because she could see the big swings that spin around in a circle and was mesmerized.

So, once Sam and I ate, we headed off. It took a lot of convincing to get Anna to wait in line for the first ride, the sky coaster, but she loved to see the "yeshi" (her all purpose word for when she doesn't know the name of something), or Star Blaster ride that shot people up in the air on a tall tower. A month later, Anna will still say, out of the blue, "It was fun to see the star blaster!!!!" 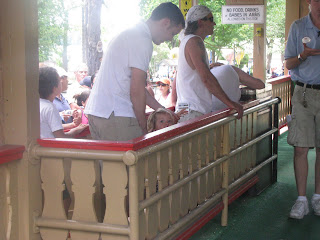 Once on the ride, Anna loved it, though Sam said his stomach was in knots as Anna wanted to sit on the very edge of the bench and would push away Sam's hands whenever he tried to hold on to her. (A note about the pictures: of course Anna fell and scraped her face on the way home from the pool the morning of this little trip when I had intended to take a lot of pictures) 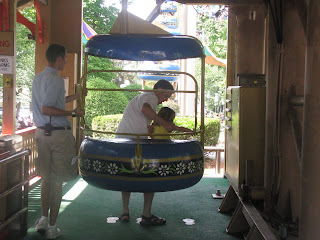 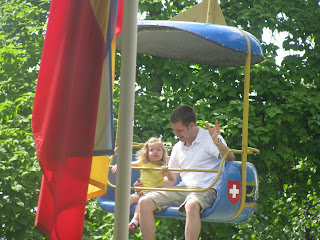 After all of us rode on the antique cars, we discovered the little kid rides. Anna seemed a little wary at first, but once she saw she could ride in a boat, she was convinced. It took her a while to warm up. All the other kids were turning the steering wheels and ringing the bells on the boats, but Anna mostly just sat there with her thumb in her mouth and only gave half-hearted waves after hearing us say, "Wave hi, Anna!!!" as enthusiastically as possible. Still, she loved it, and rode every single ride in that section of the park. We loved it at first, too and flashed tons of pictures, but Sam and I soon got bored and I think even Anna got a little jaded after a while once she realized that every single ride was the same (sit in a boat/jeep/bus/plane/horse and ride in a circle). Here are some of the better pictures and some video. 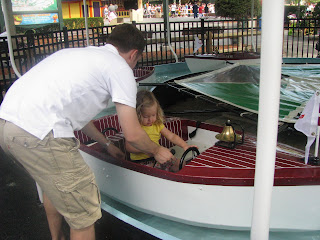 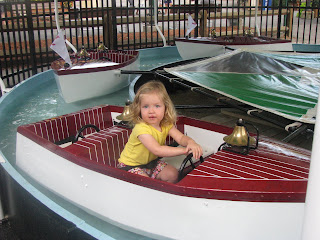 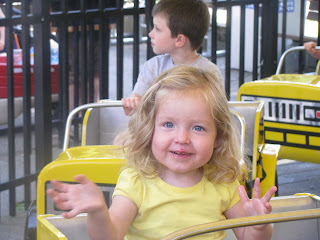 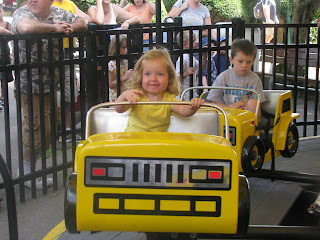 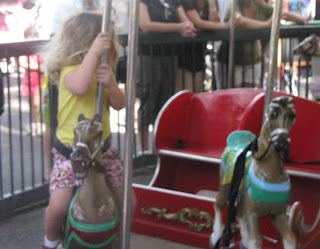 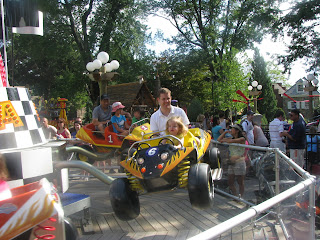 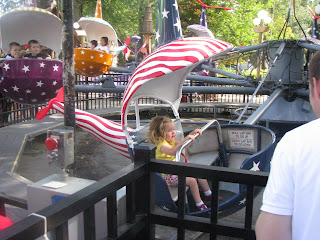 If you open this picture larger, you'll see that if you push and pull the bar you go up and down. I wouldn't say Anna got the hang of it, but she did manage to move herself around more than some older kids whose helicopters just sat on the ground the whole ride.

Once she got tired of it, she and I rode the train around the park and then Sam got in line behind a guy from work to get on a mini-rollercoaster. I was so excited for Anna to ride it, but the line was taking forever, so I had her ride the mini-swings. She begged to go on them again, but I thought Sam was getting close to the front of the line. We went to check, but there was still time, so I took her on the kids version of the star blaster called the Froggy Jumper. Anna laughed and laughed the whole time as it bounced up and down. 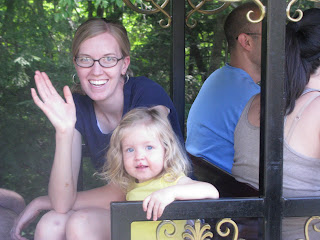 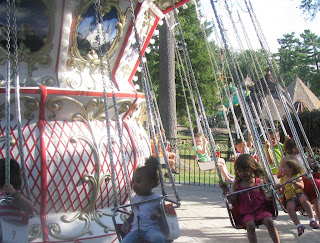 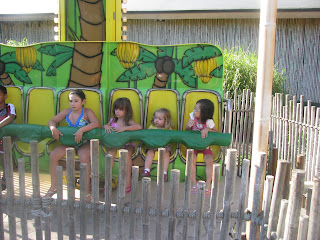 Finally, Sam was close to the front, so I sent Anna up to stand with him. Right before it was their turn to get on, she hit her head on one of the rails and went nuts. Sam tried to console her, but there was no way she was getting on that little dragon ride, so we brought her down and headed for the exit. She was hot and tired and hungry, so we gave her water and crackers and she watched the boat ride go back and forth while I fed Levi. Every time the people on the ride would scream, Anna would go, "Woooaaah!" too. It was very cute.

On the way out, when she was feeling better, we passed a little log ride that I thought she should ride. It turned out to be the most boring ride on earth as the logs followed a path of barely moving water at about 1/2 a mile an hour. All the dads in line kept sarcastically telling their kids not to be frightened and mocking the ride in any way they could, and Anna was certainly confused on the point of her sitting on the log, but it appeased my desire for her to go on one more ride, so I'm glad we did it. 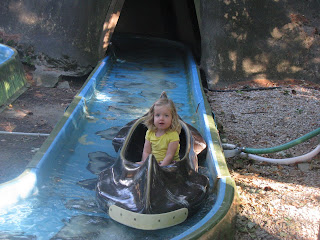 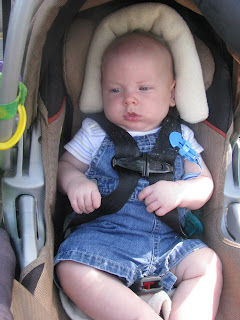 This is what Levi looked like when he wasn't sleeping.

It's certainly no Cedar Point, and definitely not worth the $30 per person regular admission fee, but it was the perfect outing for our little family. I also have to admit that Sam and I were pretty proud of Anna for being a little daredevil for trying and loving every ride. We're looking forward to next year's trip.
Posted by heather at 8:38 PM 3 comments:

Had me a good chuckle when I read this. Read the comments for more symptoms.

PS-- is there anybody else out there who can't ever think of the word "chuckle" in the same way after Liz Lemon's sandwich with extra chuckle on 30 Rock last season?

PPS-- someday there will be a real post again on this blog. promise.
Posted by heather at 8:36 PM 1 comment:

I found these today in the blogosphere. I thought they'd be fun to print on cardstock, laminate, and use again and again. I bet Anna would be occupied by this for at least 8 1/2 minutes.

Once I can find a fabric store that's less than 1/2 hour away, I might make these out of felt.

While I'm on here posting, I might as well share this photo. It makes me laugh every time I see it. Anna really did wear this to bed all night. 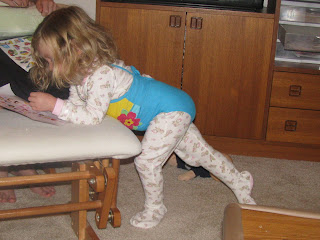 And a little bit about life here. Our apartment is mostly organized. We just need to get our pictures out of boxes and onto the walls. We got a freecycled entertainment unit that's perfect for our needs and keeps all our electronica out of little hands and a freecycled dresser to house Anna's vast wardrobe.

Anna just keeps getting more and more opinionated about everything. She throws things more than I ever thought she would (did anyone else expect their toddler to be a little less toddler-like than other people's children?). And she says "no" to everything just because she can. She says "no" even when I'm not asking her anything. I do my best to give lots of attention, get dinner made while she's asleep, and let her know what's coming in the day, but sometimes that's still not enough. I'm learning to not feel like a bad mom and just accept that this is how toddlers are and that she will not grow into a food-throwing 10-year-old (which is true, right?).

On the flip side, she is getting more and more curious, independent, and involved in my day to day activities. Anna totes around her toys to stay in whatever room I'm currently in. I try to let her help with whatever she can while I'm cooking and make a point to do some creative activity with her each day. Yesterday we took her plastic fruit and vegetables and new little pots and pans my mom gave her (thanks Mom!) and made vegetable stew and fruit cobbler. She watched and copied my actions intently as we pretended to cut up the carrots and put them in the pot and squeeze the lemon juice over the cobbler. She repeated everything I said and after I put the cobbler in the oven she said, "I will do it!" and opened the "oven" and put in the cobbler and turned the knob to turn it on. We enjoyed a delicious imaginary meal together in those few minutes and I savored every adorable moment of our playing together.

Levi is still as social as ever and loves to play pat-a-cake and peek-a-boo. He loves his sister and they love to laugh together. He's nearly 17 lbs at 4 months old and he always wants to be a part of the action during the day. He's been a little sick and fussy for a few days and I'm not sure whether that's a result of his shots, teething, his ever-changing, ever-developing nervous system, or a combination of all three, but I'm looking forward to getting him back to his old sleeping habits soon.

Massachusetts is beautiful and I've gone running and biking in the hilly, rocky, Acton Town Forest right behind our apartments. We went for a picnic at the playground next to the library today. Our ward is the largest in all of New England and New York so we're looking forward to meeting everyone there once they all return from their summer vacations. Sam has been called as an assistant Weblos leader with another young dad in the ward and I'm both speaking in sacrament meeting and teaching Relief Society in a couple weeks.

Sam and I celebrate four wonderful years of marriage this week and can't wait to leave the kids with a babysitter and go out for dinner and Kimball Farm ice cream. Life is good and I'm so glad he picked me to share it with.
Posted by heather at 1:53 PM 6 comments:

I just posted some recipes we've tried and liked recently at my family's recipe blog. Feel free to check it out.

Some other favorites on the site:
shrimp, avocado, and mango salsa quesadillas
southwest pasta salad
dinner in a pumpkin
creamy macaroni and cheese
Posted by heather at 8:38 PM No comments:

Oh how I wish I could do this a little more often. It's so hard! This little rectangle of black plastic is just so tempting. I must pray every single day, often several times a day, to have the power to withstand opening it up and taking a peek, which will inevitably turn into a long, dazed stare. I'm sure I'm addicted.

But those moments when I can resist-- they're so pure! so joyful! so heart-bursting full with love for this brilliant, crazy, loving child and the baby who is sitting there smiling at me. Of course, they're just moments and when that loving, crazy child gets frustrated because she can't put her backpack on by herself, she throws a fit and whatever else is within reach (I just had to laugh at the throwing, Lizzie. That is my life.) and I want to slink back into my safe, whine-free, little box. But that just leaves me feeling guilty for abandoning the little peanut who just wants Mommy to play with her.

I try to keep busy with other things to avoid blank time that I can fill with the internet and try to savor that feeling of accomplishment when I fill an hour with laundry or sewing a dress or cooking a yummy meal (or all three! look at me!) instead of frittering it away on craft blogs (so much less satisfying that actually crafting...)

I guess it's just another weakness that I get to turn into a strength. Oh please Lord, make it turn a little faster.

PS. That link is from The Mother Runner, a blog my friend Lizzie writes. As she puts it, it combines motherhood, running, and good writing-- three of my favorite things. If you've got any interest in any of those things, I highly recommend checking it out.
Posted by heather at 9:35 PM 2 comments: