I'm still torn about the Presidential election. I don't like McCain, and I don't like the Iraq war. I like Obama and I think he'd be a great ambassador to the rest of the world who hate Bush, but I'm not sure about some of his ideas for the economy and health care (which is another post... I'm a little more left than right on this one, but I'm not sure I like his take on it). So I've been waiting to see who the candidates would pick to be their running mates to see if that would influence my decision at all.

When Sen. John McCain announced his running mate choice of Gov. Sarah Palin on Friday, I'll admit it made me re-think my image of McCain. I had expected him to choose a "safe" candidate like Romney or Pawlenty, while secretly wanting to choose Lieberman. Instead, he chose Palin, the self-proclaimed "hockey mom."

I can see why: a woman might pick up some Hillary independents, Palin is evangelical and 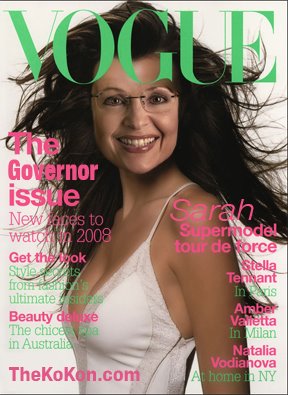 And, I know McCain's only 72, but still... Here's how Sam put it as we talked about it in the car. "The first thing everyone thought when Palin was announced was 'Really? Cool- she's a woman.' And the next thing they thought was, 'What if McCain dies? Do we really want her to be President?'"

It's easy to poke fun at the choice. And, for better or for worse, Maureen Dowd did a really good job of doing just that. Enjoy.

Hey Sam and Heather,
I was trying to find some of my old "Chem E" friends that live in the Houston area (that's right, we moved here like a month ago) so I did a google search for you. I'm glad to see that you are doing well. Anyway Makana is due any day now and we're pretty darn excited. Anyway, if I remember correctly that you are in Freeport/Lake Jackson, we'll have to get together some time. Number is (801)635-51333 and blog is mkhansens.blogspot.com

Dowd was perfect. And I have no clue who I will vote for at this point. Let the debates begin.

i've been gone for the weekend and totally missed the attack on Paula. Dismayed this morning at the state of her teen daughter. Will have to read the articles. For me, I don't care if she's experienced or not..it won't take long for her to get it..and she is the VP candidate, for pete's sake. VP NOT Prez. Even if he is old, and might die in office, McCain will at least get her started if they get elected. Still not sure about that one.

But I know that I will not vote of Barry.