We Cosbys are really cool. We're cultured and outdoorsy and up-to-date. You can tell by all the cool stuff we do. Take, for instance, our latest trip into Houston.

We went to Miller Outdoor Theater to see Madame Butterfly performed by the Houston Ebony Opera Guild. It was a free show (as a side note: I think it's funny that Sam and I only go to free symphonies and operas and museums where the material is arguably of much greater worth than say a movie, for which we pay $8.75, or dinner at Chilis which can get pricey). The night was beautiful, warm, breezy, not too humid, and Sam and I saw a couple shooting stars.

Sadly, Sam and I were not very impressed with the opera. I'm sure that's due to a number of factors. First, it was performed in English, which, as everyone knows, is not as beautiful as Italian. Second, I couldn't understand a lot of what was being said because the sound wasn't that great, and the words weren't said, they were sung. Third, the man playing Pinkerton must have been having trouble with his voice since he often sounded raspy. Finally, it did not meet my criteria for becoming an opera/musical that I love because it neither a) made me think "Wow! that was a really beautiful aria/duet/intricate octet, etc nor b) made me walk away humming one or two of its melodies in my head. I certainly recognized some themes in the music, but they didn't stick with me like two other operas I've loved: Carmen and Don Giovanni.

However, this particular performance, being done by an all black cast, did make me think of how it was a pretty relevant story for Houston. A black woman, who is assured of true love by a man, is left abandoned with a child. I know it's politically incorrect of me to have just made this connection since it was a black cast, and to have never realized it before, but well, that's what happened. Anyway, I wondered if anyone else made that connection and what they thought of it.

On another note, Sam and I just read Freakonomics which has a large section on the black-white income gap, black crack gangs in Chicago, and the difference between high-income and low-income names, along with sumo wrestlers, the KKK, real-estate agents, and abortion. The entire book is about as unified as that sentence I just wrote. It's basically a collection of Stephen Levitt's papers put into anecdotal form. I found it entertaining, though not very enlightening. I'm currently in the midst of The World is Flat and Sam just read Guns, Germs, and Steel and with all these books it's fun to see how authors are RIGHT. It makes sense. No one wants to read a book where the author is always doubting his own argument. Still, those kind of books read like an entertaining college lecture, but without highlighting inconsistencies and opposing arguments.

Aside from all that, life is fairly normal. We take walks, talk about our dissatisfaction with the two-party system and our ambivalence toward the war in Iraq, make dinner together, and discuss various life-plan options available to us. It's nice to be married and have someone to do all that with, especially someone as kind, funny, smart, and helpful as Sam.

Oh, and Sam found a man named Jose selling $25 TVs on craigslist, so we can watch movies on something other than the laptop again. Yay! I just found Sense and Sensibility at Target for $5, and Sam is such a nice husband that he says he's excited to watch a Jane Austen movie with me, even when he didn't like the book. What a guy!

PS-- The Chacos came! Hurray! They're soooooo comfy. They have better support than my running shoes! 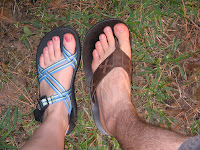 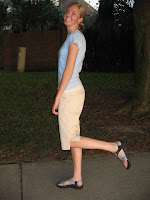 Did I see Carmen with you at BYU? I know I saw it, I just don't remember who with.

Also, I really liked both Guns, Germs, and Steel and Freakonomics, but the latter I actually listened to on cd, which might have made a difference. I thought they were interesting and entertaining, and they helped me look at the world in a different way, which is usually (but not always) a good thing.

Besides Wicked, I can think of very few things we've paid for that have been worth the price in and of themselves. Sometimes the cost of a movie was worth it because it got us out of Laie and allowed us to see some beautiful scenery and have some wonderful conversations, which I could include in the cost of going to the movie (there weren't a lot of other "cultural opportunities" out where we lived) and which made it worth what we paid.

I am afraid you got spoiled in Oberlin, getting Met-quality performances at ridiculously cheap prices.

There are a couple of PBS versions of Madam Butterfly that were beautifully staged, costumed and sung : I can still SEE the final scene of one in my mind - after 15 years. Maybe you could find one at the library?

MB was the first opera I remember seeing. I end up humming the 'humming chorus'. Mom