Our first anniversary is today. Hooray for us! One year and going strong. We have had a lovely weekend.

Friday was my day to plan. We had a leisurely morning and then went to see The Bourne Ultimatum. I had intended to let Sam choose whichever manly movie he wanted to see (Transformers, Live Free or Die Hard, or Bourne) but Transformers' first showing was too late in the day to get the $4 weekend morning show ticket price, and Die Hard wasn't there any more, so Bourne it was. I was happy because I really wanted to see it and Sam assured me that's what he would have chosen anyway. Overall, we liked it. There were some awesome chase scenes on both foot and car/motorcycle but there was also some violence that I closed my eyes for. Sam and I both wished we could have gone with Grandpa Roly, who LOVES the Bourne movies.

After the movie we ate some homemade pizza on our way to the Forbidden Gardens which has a small model of the Forbidden City and a replica of the tomb of emperor Qin, discovered in 1979 and filled with an entire army of terra cotta soldiers. Here is a short history of the Gardens from roadsideamerica.com 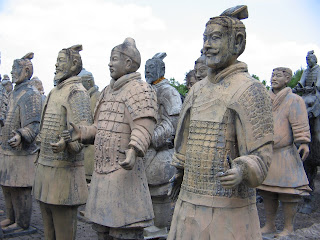 "Forbidden Gardens was built in 1997 at the pleasure of Ira P. H. Poon, AKA "Mr. Poon," a Hong Kong real estate mogul who wanted people of Asian descent (including his teenage children) to know something of Asian culture besides firecrackers and kung-fu. Mr. Poon lives in Seattle, but preferred constructing the sprawling exhibit somewhere outdoors, open year-round, on flat, cheap land, where there was a large Asian population. Houston, 25 miles east of Forbidden Gardens, has the third highest in the nation."
It was incredible to see the models. They had about 20 full size replicas (the close up) and three spreads of half size replicas, including some of the cavalry and the room that had been singed by fire from tomb robbers. (It's a funny story-- they came in and robbed the tomb and then tried to set it on fire to destroy any evidence they'd been there, but when they left the tomb, they shut the door, closing off the oxygen supply, so everything is in tact, just blackened a bit.) 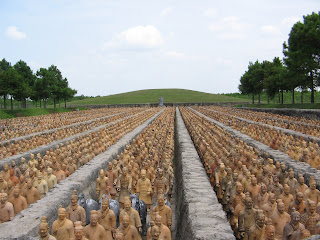 We also loved the names of the palaces in the Forbidden City, things like, The Hall of Supreme Harmony, The Hall of Imperial Supremacy, The Hall of Earthly Tranquility, The Palace of 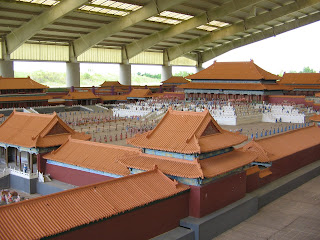 Heavenly Purity. Each roof had its own color and those had different meanings. Most were yellow, the color of the Emperor. The library's roof was black, the symbol for water, to protect the books from fire. Others were green symbolizing growth and fertility, like the building where women came to have their babies. We loved hearing about the symbolism because it's so different from what we see in palaces in the west. Symbols of nature and color really faded away when Christianity pushed out the worship of nature.
My favorite part was hearing about the construction of the city. The story was told to us like this: All the best architects in China were brought together, but couldn't think of how to build the palaces. After much mental anguish, the dragon god came down and presented them with a cricket cage. Crickets not only symbolize 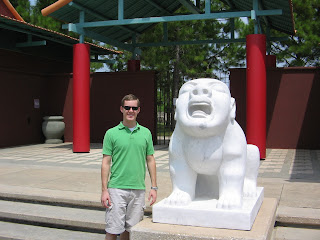 luck, but they also were used as a security device since they stop chirping if someone comes near them, and you'll know someone's outside snooping around if your cricket goes quiet. The emperor loved it. It was a beautiful design and could say to his enemies, "If you try to come near, we're always watching." The building relied on the weight of slanted wood slats leaning on one another to hold itself up, so no nails or cement were used in construction, just a little tree sap. Incredible! And, the whole city went up in only 14 years because the emperor enlisted one million architects and laborers to come get the job done. 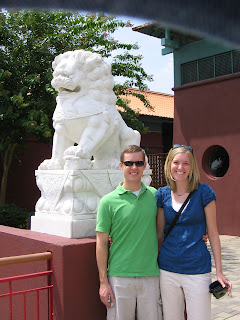 After the gardens, we bought some Blue Bell ice cream, a Texas original since 1911, and the third-best-selling ice cream brand in the nation. (It's been eaten on the space shuttle and at Camp David!) The Strawberries with Homemade Vanilla is amazing. Then Sam read a little while I went and bought food for dinner. We had steak topped with garlic butter, shrimp cocktails (though they too ended up being dipped in the left-over garlic butter), and Caesar salad. I also lit a candle and made a short playlist on Windows Media Player of love songs to satisfy my own romantic desires.

After dinner, we were going to go to the batting cages, but that didn't quite work out so we went and walked around the very ritzy, very pretty Galleria mall (according to their website, they're the fourth-largest mall in America) which is built under a long glass atrium. While there we peered at designer brand clothes and jewelry and played in the more accessible, middle-class-friendly Disney store and Apple store where we got our fill of playing with the new iPhone.

What a great day! Sam planned Saturday, and I (we?) will write about that soon. It's bedtime now.
Posted by heather at 6:47 PM