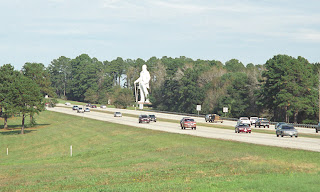 Sam and I were driving to Dallas on Friday morning when we noticed a sign on our right which said, "World's tallest statue of an American hero." Our curiosity piqued, we kept our eyes open and in a few moments, there it was: a 67 foot tall statue of Sam Houston at the side of I-45 in his one-time home, Huntsville, TX.
Upon sighting it, I was at first shocked and then burst out laughing because, as you can see from the freeway picture, the statue is pretty abrupt and seems more than a little out of place. Well, at least to an outsider. Sam (Cosby, not Houston) took the statue a little more to heart having been indoctrinated with glorified stories of 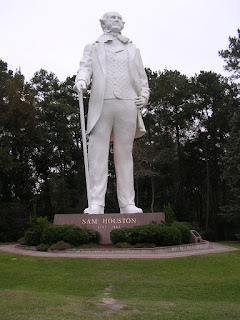 Houston's heroism in revolutionary triumphs like the Battle of San Jacinto where he and his men beat the pants off Santa Anna who had killed all their friends at the Alamo a month before. However, despite my amusement, I had to admit to Sam (Cosby, AND Houston) yet again that everything really IS bigger in Texas.
It's true. Texas has 3 of the United States' top 10 cities by population and 5 of the top 20. It's the second largest state in the Union both by area (to Alaska) and population (to California) and home to more Fortune 500 headquarters than any other state. The port of Houston is the sixth-largest port in the world. "Big" is an understatement when referring to Texas. As I thought about it, I came up with a few more things that are bigger in Texas.

1. Churches
Sure, California's got the Crystal Cathedral and Saddleback Church, but no one's got more big churches per capita than Texas. Big churches in Texas are just slightly less prevalent than LDS buildings in Provo, and that's just because they can hold more people. Lots more people. Take the BIG church that is the view out every single window in our apartment, Grace Fellowship United Methodist Church. When we first got here, we thought the church was the expo center we saw advertised, but no-- that's dwarfed behind the church which also has a large school with 3 wings and 4 portable classrooms. BIG. And there are countless others just like it. The best part is, they're full, so we have some wonderful neighbors.

2. Freeways
We thought I-10, which goes from the gulf coast through the center of Houston all the way to San Antonio, was a big freeway. It's got about 10 lanes, and like any other respectable large-city freeway, is currently under construction. This construction, which we assume will be finished by the time the area it serves grows by another 463% in a decade (I'm not kidding), is meant not only to update its 1960's construction, but also to widen it to a gargantuan "24 lanes, including feeder roads." BIG.

3. Houses
They are both tall and sprawling, for two reasons. First, there aren't any basements in Texas, due to the level of the water table, or something like that, so if you want three floors, they've got to go UP. Second, land here is plentiful and cheap. Sam's brother who lives in New Hampshire bought a condo for the same amount of money his high school buddy used to buy a beautiful, new 4 bedroom home here in Texas, and that's with an entry-level income. If you're at the peak of your career, you can be assured of getting a nice big dream home in Texas.

4. Phonebooks
I have 3 of them, all new, all for only west Houston. Again, cheap land + lots of people = having 3 T-Mobile stores and 17 smoothie shops (Piccomolo gets two thumbs up, but I haven't yet been to Funky Monkey or Iggiz) within two miles of my front door.

5. Hair
Some people say it's the cowgirl in Texas women. I say its the humidity.

6. Trucks
Tons of them, and all jacked up. When Sam and I went to the DPS to get his license renewed, we pulled up next to one of these trucks. The bottom of it's body was at the same height as the rack on top of our station wagon.

Cinco Ranch High (the one where I would send my teenagers if I had them) covers 66 acres and the teachers use golf carts to get around campus. Need I say more?

8. The Sky
About half of Texas's population is located either in the Dallas-Fort Worth or Houston areas (with another good chunk in San Antonio). As such, once you get outside that, it's just fields and forests. I've seen many a big sky in my day on my innumerable road trips across Nebraska, Wyoming, Arizona, and New Mexico, and I can say Texas's sky is just as big and beautiful as those of the great plains or the southwest deserts. Simply lovely. And big.
Posted by heather at 10:10 AM

Wow, Heather, they sure got to you fast. Now they've got another persuasive writer pumping out pro-Texas propaganda to all her relatives! But I'm glad your reports are positive. It's nice to hear that you like it down there.

Does this mean you are also a Bush fan? that might need to change. I'm not sure what he's the biggest of but I have an opinion...which I will not share here on your blog. But I do share it every place else.

I wouldn't say I'm quite a true-blue Texan just yet, Steve, but you're right, I do like it here so far. I'd say I meant to have more of a tone of awe at Texas in this post rather than a love for it. I'm still yearning for a stint in Boston in my heart of hearts and to admit that in this state is like blasphemy.
And Susan, be assured, I am not Bush's fan right now.

Wait-- there's humidity in Texas? I always pictured it as a kind of vastly extended Death Valley. Buzzards, cactuses, mesas, cowboy skulls, the works. I mean, once you get out of the suburbs. Like it is north of Salt Lake, you know?

No way-- I live in the gulf of Mexico. It's certainly more humid than Ohio more of the time. But it feels a lot worse since it's so much hotter here. There are deserts in the state, but mostly in South and/or West Texas. Even up in Dallas it's pretty humid.