Earlier this month (and on Sam's birthday) Sam gave Levi Samuel Cosby a name and blessing in our sacrament meeting. Sam's dad, brother Jacob, brother-in-law Gordon, and our friend (and bishopric member) Tony McClain joined him in the blessing.

We're so happy our family could join us and that Sam holds the priesthood to be able to bless our family in so many ways. 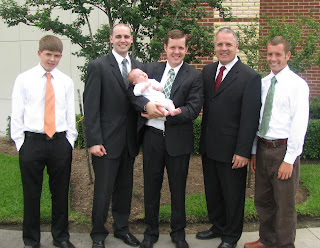 Sam and I had a tough time deciding on Levi's name. And I'll admit that there have been times I've thought, "Did we really name him that? Why didn't we think this through a little longer?" But the more I love the person, the more I love his name, and I've done a more thorough search of the name Levi in the scriptures that makes me like it even more.

Levi, the son of Jacob, might not be the best role model, but the Levites were chosen to be the priesthood holders among the twelve tribes of Israel, worked in the temple, were musicians, and were set apart for God-- all things I'd like for our son Levi.

Levi is also the name of the publican who Jesus called to be an apostle-- you probably know him better as Matthew. I hope Levi will heed the call of the Lord as willingly as Matthew did.

As Sam and I asked each other about middle names, we both had chosen Samuel as our top pick without knowing the other was considering it. I'd always liked the name and had wanted to name a son that, but I didn't want to have two Samuel's in the house, so a middle name was a good option. And both prophet Samuel's (from the Bible and the Book of Mormon) are great namesakes. Our Levi Samuel is certainly an answer to his mother's prayers, and one day, I will loan him to the Lord when he serves as a missionary.
Posted by heather at 9:10 PM

lovely entry, Heather. I think that this summer we have 3 new Levi's born to our friends. so it's an up and coming name. I personally love it. and i have come to realize that the middle name is equally fun and important. I know it is for my 5 and for most of my grands.

That's cool, I didn't know he was blessed on Sam's birthday!

Thanks for sharing this. Naming another human being is such a big responsibility . . . not something to take lightly. And yet there is a point where you just have to make a decision. I had similar "Did we really name him that?" reactions with both boys, although more so with Simon than with Oliver. Which was strange because we'd had Simon's name pretty much solidified a few weeks before he was born, but I was not sold on Oliver until I held him for the first time.

Congrats on having him blessed.