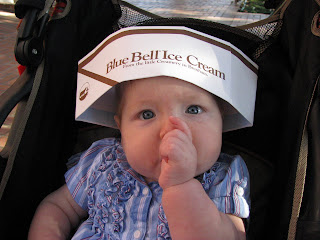 During Sam's Thanksgiving vacation time, we decided to visit the Bluebell ice cream factory in Brenham, TX. We love seeing how things work and we love ice cream, so it was the perfect little trip, despite Anna's crying almost the whole way home.

Here are some interesting tidbits we learned on the trip: 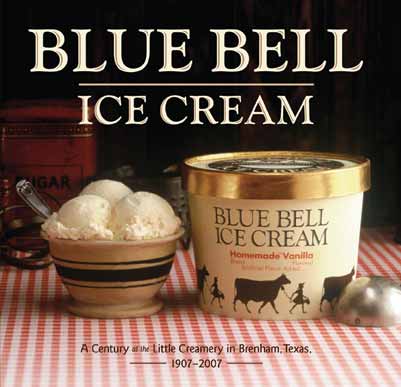 Aside from those, I was impressed by two things. First was seeing the extra ingredients get stirred into the ice cream. There was a big tub of berries getting swirled into some vanilla, and they looked so fresh and yummy. And second was the lid machine. The ice cream mix would get shot out a tube into a swirling tub (spun so there's an even distribution and no air bubbles) and then a lid would clamp onto it. But the lids came from a big box of lids that were just dumped into it. A little machine that looked like shelves moving up a rotating treadmill would catch the lids upright and roll them into the chute that led to the full ice cream buckets. If, however, a lid got on the machine the wrong way, the shelf-tread was perfectly engineered such that the lid would fall back off into the bucket. Sam told me it wouldn't be that hard to do, especially since the lids are so top-heavy, but I was still impressed at how cool machines are.

Of course, the proverbial cherry-on-top of the whole experience was the free scoop of ice cream at the end of the tour. I tried the newest flavor, Butter Nut Crunch which is basically vanilla with Butterfinger pieces in it. I still think my all-time favorite flavor is Strawberries and Homemade Vanilla. Delicious. I don't know if I agree that Bluebell is the best ice cream in the country, as most Texans will argue, but it sure made for a great day for the Cosbys. 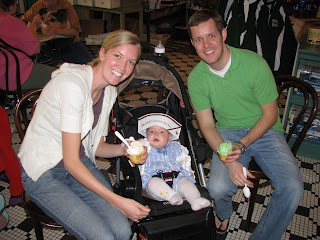 Don't worry, we let Anna have some ice cream too 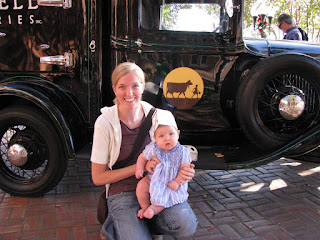 In front of the still-running Ford delivery truck. This one's for you, Dad. 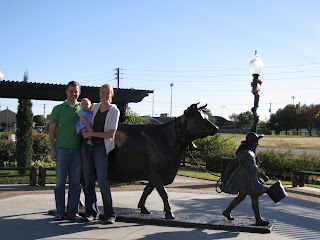 The whole fam with the Bluebell girl and cow
Posted by heather at 9:08 AM

A) I'm super jealous
B) I'll have to disagree, Bluebell is the best ice cream I've ever had.
C) I want some right this second!

Anna's little dress is super cute...and I love factory tours and the free samples at the end :-)!

She is absolutely gorgeous. Gid bless her.

I miss Bluebell ice cream so much!

I would love to tour the factory some time, but I always in Texas for such a short stint that I'll likely never get the chance. Alas.

Also, a funny side-note. I worked at a grocery store in high school, and a customer once told me about how he only gave his dog Bluebell and the dog wouldn't eat anything else. I told my dad, and he wrote a letter to Bluebell. Then they sent him two coupons for free half-gallons. It was awesome! Especially considering how expensive Bluebell ice cream is when it's not on sale.

Ahhhh. Strawberries in Homemade Vanilla. . . .just might be the best ice cream ever. How many gallons did I buy (and eat) the month Anna was born? Three? Not enough.
Momender646

ok, so i'd NEVER heard of bluebell ice cream before christmas, and now i feel like i'm hearing about it EVERYWHERE! my brother-in-law is obsessed. i'm going to have to try it sometime soon. until then, i'll stick with nice, cheap safeway brand. :)

Very interesting. Thanks for sharing! I want to go.