I know Halloween is long past, but it was such an eventful week, I can't help but blog about it.

A week before Halloween, Sam, Anna, and I went to a pumpkin patch run by our local Methodist church. It was perfect for our needs: free, small, simple, shady, and full of pumpkins and fall decor for documenting Anna's first Halloween. Still, the cars and people were pretty distracting to Anna, so it was all we could do to get her looking in the direction of the camera, let alone smile, but she looks cute nearly all the time, so we still got some good pictures. And they accurately capture her bewilderment at being dressed in a hot, orange, fuzzy thing. 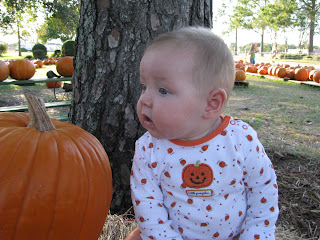 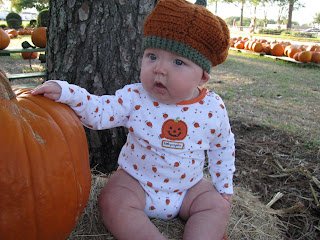 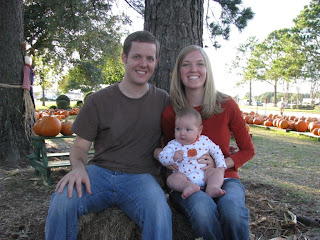 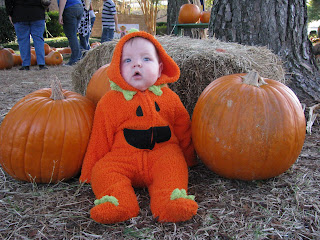 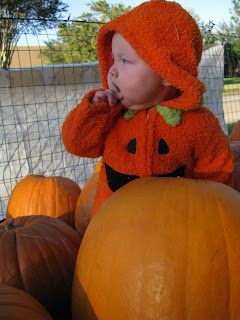 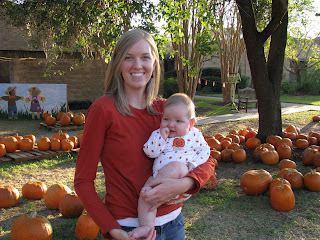 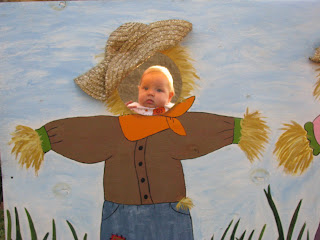 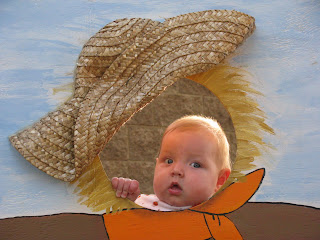 Afterwards, we had to pick some things up at Walmart and Anna had her first experience riding in the shopping cart seat. Since the camera was in my bag, I had to document the occasion. 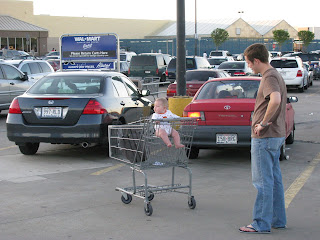 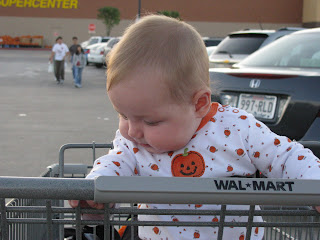 The day before Halloween was the Halloween party at infant story time at the library. We brought a plate of cupcakes to share and went to sing songs and see all the other adorable costumes on our baby friends. Amber and Alisa have some great pictures and descriptions of the event as well. Anna's friends from church were dressed as twin chickens, twin penguins, a lion, a ladybug, and a cowboy (with homemade chaps no less! check them out). We sang our songs, read stories, and then ate yummy treats. There was so much food that no one ate any of my cupcakes, so I decided to take them to the workers at the early voting location that was my next stop. 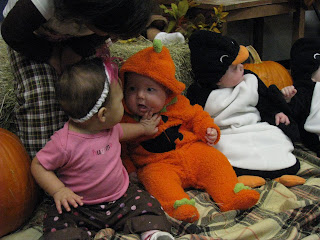 why we love story time 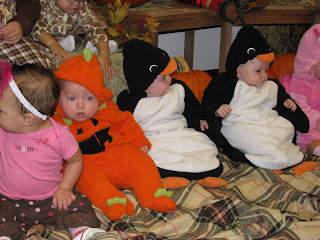 Anna with buddies Maya and Max 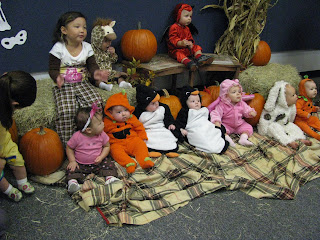 I'm a huge fan of early voting. It was a beautiful day to drive out to George Bush Park with the windows down. I took Anna, still in costume, and the cupcakes with me. As we walked up to the building, we were approached by a woman and a man handing out brochures for Texas State Senate candidates Chris Bell and Joan Huffman,respectively. The woman said, "Since you're voting for Obama [I had an Obama button on my diaper bag] you're obviously going to vote for Chris Bell," and was about to continue when the man jumped in and said, "Well, hold on now. She's got a plate of cupcakes, and you know that's a Republican thing."

Now, I consider myself an independent, and voted for Democrat, Republican, and Libertarian candidates this election, but I can tell you one thing. The Democrat worker declined my cupcake offer and the Republican accepted. ("I love food almost as much as I love Joan Huffman's commitment to border control.") I'm just sayin' is all.

Between my adorable, pumpkin-clad baby and a plate of cupcakes, I was easily the most popular voter at the polls. I got lots of smiles and thank you's and compliments on my baking/frosting abilities. By the time I left, I decided cupcakes must bring out strong feelings in people especially when the middle aged man who gave me my voting pin number said, knowingly, after a fellow worker informed him I was the one who brought the treats, "Aaaah, you're a cupcake mom."

I have no idea what he meant by that, but I've decided to embrace that as part of my identity: a socially-minded, diaper-changing, travel-loving, baby-wearing, la leche league-attending, ice cream-loving, book-reading, tree-hugging, church-going, independent, stay-at-home cupcake mom.

That night, over a delicious, candle- and jack o' lantern-lit dinner in a pumpkin (inspired by Amy's mom and yeswecarve.com), I rehashed the days events. Alisa brought a yummy, warm pumpkin ginger soup, and four friends and three babies had a marvelous Halloween. If I had to guess, I'd say a tradition was born. 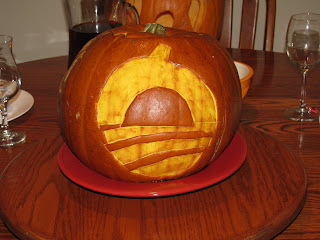 And yet the stereotype is that it's the Democrats who favor free handouts. . . . Loved the post.

Democrats love freebies? Well, that makes sense to this democrat. But we go to the Broadway Buzz before the Broadway shows at playhouse square and last Friday we learned all about STEREOTYPES....hmmmm.... I think I joined the CERT training just for the backpack filled with goodies. But years ago, we started a tradition on Halloween with another ward family.....which i oughta blog when I feel better. Thanx for reminding me

Wow. She is getting so big. I lost you for a while. But now I found you again.

Cute Pics Heath! And P.S. that was a very good question---my mom did scream...loudly! :)

Tiffany said...
This comment has been removed by the author.
5:40 PM