we really did move to california. promise.

I know I've hardly posted anything since we moved here. Part of that is due to some major computer malfunctions that have made accessing pictures (which not only add a little flavor to our posts, but also remind me of what actually happened since living with two toddler/preschoolers has robbed me of my short term memory) occasionally impossible and frequently impractical.

But look at me now! The kids are both miraculously napping (Anna gave that up upon moving to the Golden State) so I'm getting started. Here are some photos of our hotel stay. We ended up being there almost 2 full weeks. It wouldn't have been so bad if we'd had 2 rooms in our suite, but with only 1 room, one of us spent up to 3 hours a day in a darkened room so that the kids could nap. Talk about boring. And energy-sapping.

But we tried to make some fun and had a surprise party one night. 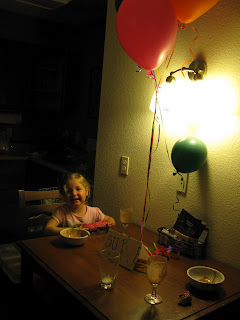 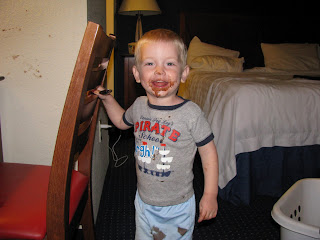 I set up balloons and doughnuts for them to find after coming back from dinner downstairs. The next morning, I added some gift bags with toys from Michaels' dollar section. 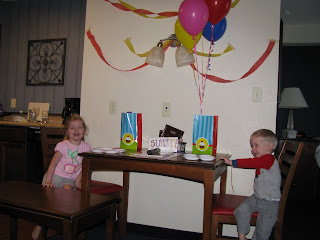 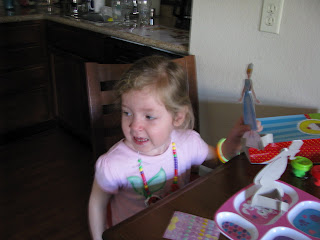 Anything we found in the hotel room became a toy and these measuring spoons were perfect for the mini cups of playdough I bought. 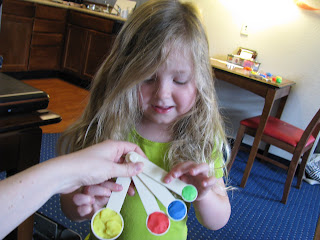 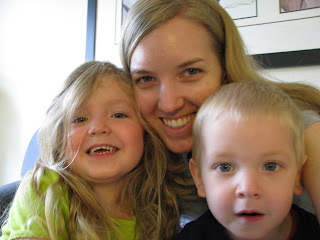 Other nights we played good guys and monsters and tromped all over the hotel surprising each other and being really quiet so we could sneak up on the monsters
Posted by heather at 5:06 PM

I love the pictures and the party! And you survived to post it! Keep us smiling with those great pics (when the computer permits!)

Great ideas for surviving.
You should ask your dad to tell you his stories about his family living in a hotel in Spain for a month. Very entertaining now : horrible then.