One of the best things about Sam being at MIT is getting to live so close to Boston. We can easily walk or bike into the city on nice days, or take the free shuttle from our housing complex to the T station and take a short train ride wherever we want to go. Here are a few of the adventures we've had in Cambridge and Boston this semester.

A bunch of museums, universities, libraries, and churches in the Fenway/Back Bay area of Boston had a Saturday where everything was free. We walked over the the Christian Science Plaza (this is like the Christian Science Temple Square) and listened to music, walked in a little parade, drew with chalk, watched glass blowing, got free balloons, art supplies, and cupcakes (from kick@$$ cupcakes- my new favorites). This portion ended with a live performance of The Boston Song from the NEC students who wrote it. We got a free CD of it so we can sing along. SO GOOD! SO GOOD!

Over in the Mary Baker Eddy library, there was live music from NEC students, Halloween crafts for the kids (Anna made a spooky bat), the Mapparium- which was really cool to go inside, and face painting. This is the first time Anna's ever gone through with face painting, though we've stood in line before. She was SO EXCITED about it and it was super cute to see. Sam did some more chalk with the kids while I took a little tour of the First Church of Christ Scientist, or Mother Church, which was interesting. We finished up with lunch at P.F. Changs and walked two very sleepy kids back home. 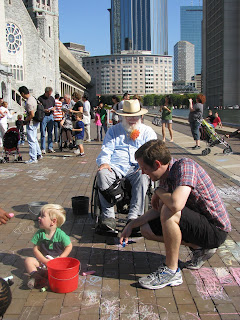 The guy in the wheel chair is Sidewalk Sam who is a chalk artist and he would roll around commenting on all the kids' pictures. 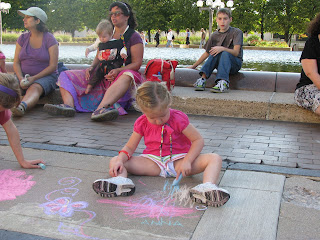 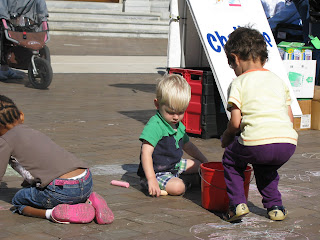 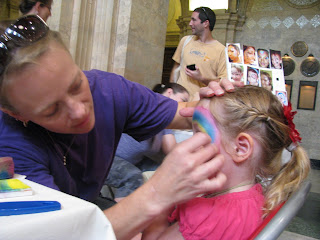 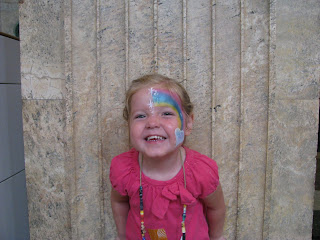 The circus came to Boston and the train parked on the tracks right behind Westgate. We heard they paraded the elephants from their parking spot to the circus arena in Boston, so a few minutes before they were supposed to leave, I loaded the kids up and headed to Mass Ave to watch them go by. Once I got there, I met up with a friend who informed us they had passed by 10 minutes earlier and were on their way up Memorial. Not having anything better to do, I started walking after them. Once I hit Memorial (about a half mile walk) and could see the line of cars behind them, I started running-- in my jeans and ballet flats. I ran as fast as I could for a mile and still hadn't caught up with them. Once I hit the Longfellow Bridge I decided if I couldn't see them, I'd turn around. Well, a little flash of elephant tail caught my eye, so I hauled the double stroller down a flight of stairs backwards, ran under the bridge, sprinted across four lanes of traffic and ran another quarter mile to catch up with the elephants. Thankfully, my kids were appropriately excited enough to help me forget about the blister on my foot just be glad I got to enjoy the sunny fall day making my kids happy. Here's our evidence we actually made it. Next year we're leaving 1/2 hour early. 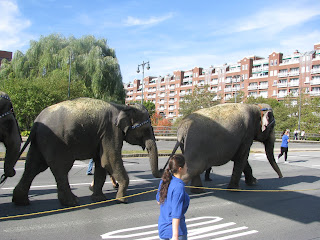 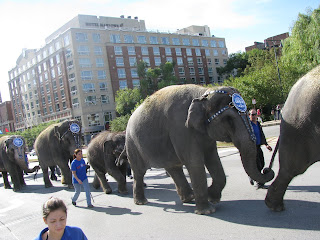 Anna liked how the elephants held trunks and tails to stay safe while crossing the street.

Sam had a midterm to study for, so he drove me and the kids to the Boston Public Library for the festival and went home. This ended up being a really great event for us and the kids had a great time. First, we went to see the Very Hungry Caterpillar. He was certainly one BIG fat caterpillar. The kids were very excited to see him and touch his fuzzy back and give him high 5. After he came, they colored pictures until Curious George came! They were a little less enthusiastic about George, so not long after, we left to see the rest of the library. The Boston Public Library main branch is beautiful with an atrium and fountain in the middle. Anna ran around it for a long time while Levi splashed in the water. 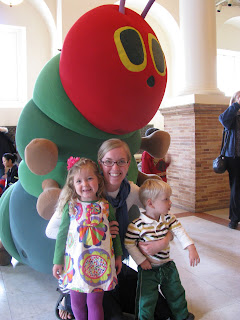 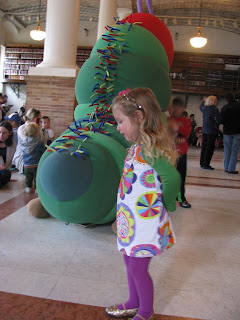 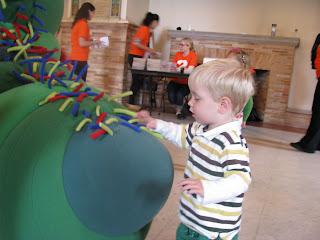 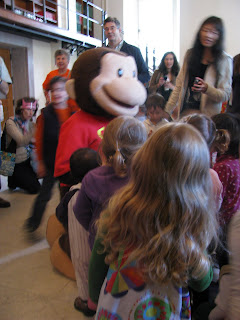 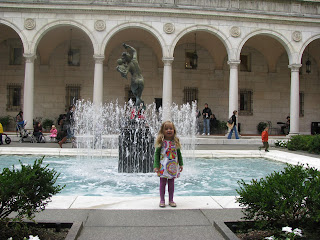 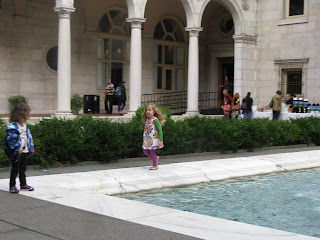 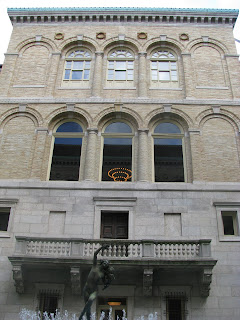 After we visited the children's room and read some books, we went out to Copley Square to complete their little passport book. We visited different vendors, publishers, and organizations and got stamps at each stop. The stamps spelled out a word when you were done and Anna wowed all the vendors by telling them a word that started with the letter they had stamped. After all our visits, we ended up with 3 free books, a recordable microphone toy, free candy, some yogurt that we ate for a snack, tons of stickers, a tiny harmonica, a few little crafts, and a high five from the Cat in the Hat! We also learned about this great website, www.wegivebooks.org. It has stories for you to read free to your kids online, and every time you complete a book, it donates books to children all over the world. There's no downside! It's just awesomeness. 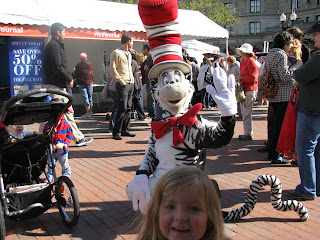 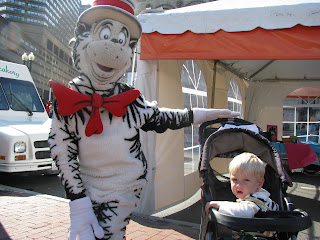 Head Of The Charles Regatta- October 22

While Anna went to Kate's princess birthday party (where she got a new tutu, magic wand, and her first experience with eyeshadow), Sam, Levi, and I biked down to the Weeks bridge by Harvard to watch The Charles Regatta which is a huge two-day rowing event. The start was actually right by the Boston University Boathouse that sits at the end of our street, so we got to see all the boats lining up and taking off at the cue of a guy on a dock with a bullhorn (I'm sure this guy has an official name, but I don't know it). I liked watching the teams the best because you could her the coxswain shouting out commands and the team members grunting and pulling together. Down by the Weeks bridge there were all sorts of vendors and lots of free samples of organic everything so we all had a nice snack :) Sam ran into some friends from BYU who are at HBS right now and it was nice to see them.
We came back when Anna's party was ending and went inside to have lunch. On our way up the stairs, Anna proclaimed, "Tutu, I love you!" 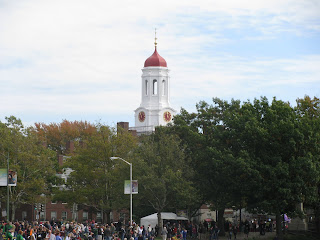 The crowd (and Harvard behind) 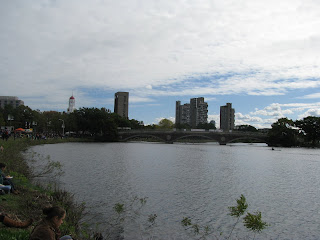 The Sloan Business School here at MIT throws an amazing Halloween party for all the children of Sloan students and faculty. They had snacks and goody bags while everyone got together and then we followed monster footprints all over the school for trick-or-treating and fun toys. It all ended with a pizza and cookie dinner. Anna was in heaven to have so much fun with her friends Kate and Kayla AND have Daddy there AND get to ride the bus home (Levi liked that part, too). 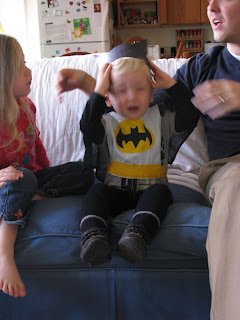 Levi did NOT want to wear his bat ears (really they are piggie ears promoting Mo Willems Elephant and Piggie books from the Boston book festival, but colored over in black, they made good bat ears)... 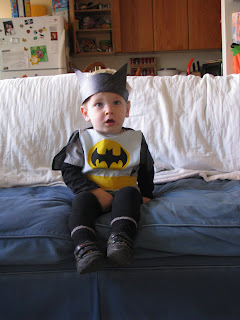 ...so we bribed him by letting him watch Baby Signing Time. Cutest baby Batman EVER. 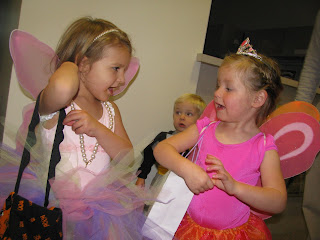 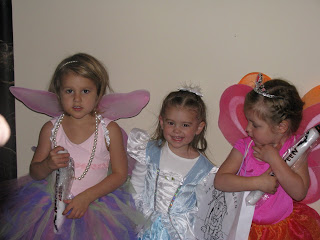 Friends are fun, but even more fun is... 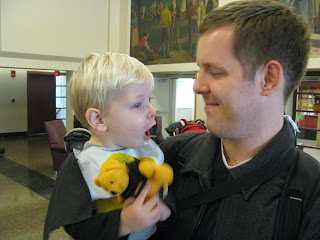 Just before Halloween, there was trick-or-treating here at Westgate. Levi stayed home and passed out candy with Sam until he went to sleep while I took Anna out to trick-or-treat. She told everyone about being a ballerina fairy princess and was pretty good about saying "trick or treat!" She simply could not believe that there is actually a day where she's supposed to dress like a princess and get candy at every door you knock on. She was so crazy happy that not long after we got home and inspected her loot, she broke down in tears and had to be carried to bed. It's tough being a kid sometimes :) 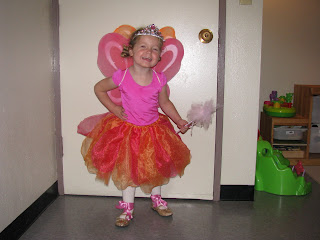 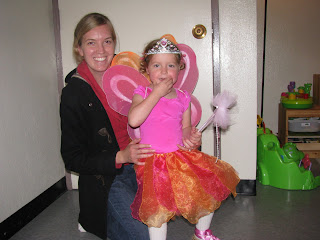 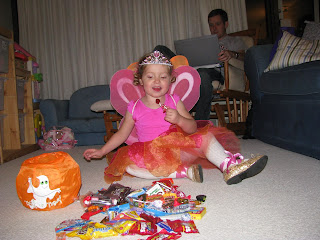 The Boston Museum of Science- November 8
Our ward has a little playgroup that meets on Wednesdays at various parks and playgrounds, but occasionally we'll go to a museum or on a big outing. It was fun to get in for free on friends' passes. Anna liked playing with the jointed skeleton and playing with some matching and texture toys in the kids room. Levi liked the water table and kid sized birds nest. They both liked this giant light brite. 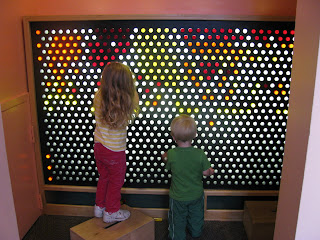 After lunch we went upstairs with Anna's friend Lily and the girls played on a playground physics exhibit racing lights down a track, swinging on swings (of various lengths to learn about pendulums), and spinning with the bike wheel gyroscope until it was time to go home.

Ice Skating on the Frog Pond- Dec 10
Sam and I did this for our date night. I got a coupon for skipping the line, so we got right in, and started skating. I went ice skating a lot in high school and every time I've gone since I remember why I enjoy it so much. During the zamboni run, we got some free hot chocolate that came with my coupon and then skated some more. It was the perfect winter activity! 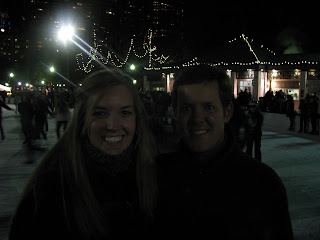 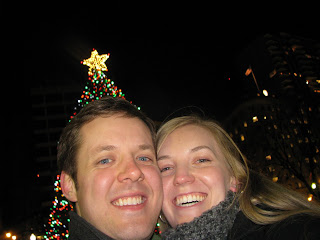 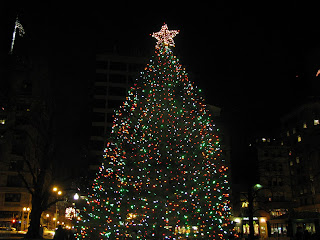 I want to move to BOSTON! What a town of awesomeness!
Anna and Levi looked adorable and it is so good of you to make such efforts to create all these great memories.
See you in a few weeks!

How did you find out about the event at the Christian Science center and the Boston Public library? I hadn't heard of either of these before and they looked awesome! When you're back next we definitely want to join you.

Wow! You guys have been busy and with so many fun activities! The elephant parade was my favorite...definitely worth the blister :-)!

just so much fun...thanx for the year in review

Love all the pictures!! You and Sam look so happy on your ice skating date!! I second your Mom's comment
"I want to move to BOSTON! What a town of awesomeness! Anna and Levi looked adorable and it is so good of you to make such efforts to create all these great memories."

Hugs and love to all the Cosbys in Cambridge,
Anna Jo

It looks like you guys are having sooo much fun! I'm loving the updates!