We had a great time in New York. Absolutely nothing went as planned. There was more than one melt-down...per day. Both kids came home with fevers, strep throat, and an ear infection for Levi.

But still, we really did have a great time! Here is every detail...

On Wednesday, we drove from MA to Staten Island (where Sam's Hilton points would get us not just one night, but two!) in only about 4 hours which was amazing considering the snowstorm that ended about an hour before we left. Once we got there, we found out they'd given us a bigger suite and had a crib and coloring book for Anna. All those nights Sam spent in the London Hilton away from his family paid off in earning Gold Member status, and we sure enjoyed those perks. We promised Anna we'd go swimming the minute we got to the hotel, but alas, it was closed, so we "swam" in the tub and put two very excited kids to bed.

On Thursday we ate a slow but very yummy complimentary breakfast in the morning before packing up every warm item of clothing we had into the stroller and taking the free ferry to Manhattan. The ferry goes right by the Statue of Liberty and Ellis Island, so we pointed those out to Anna and promised we'd read a book about the statue once we got to the library. 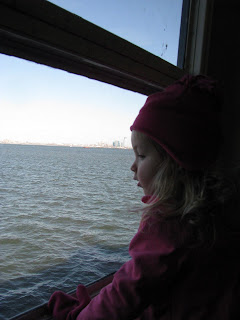 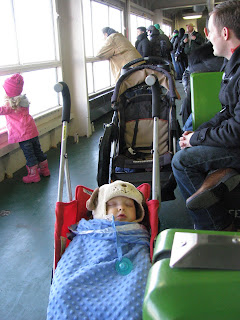 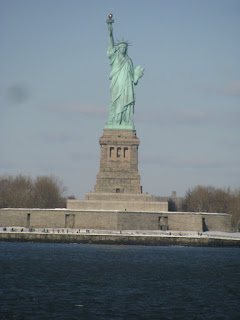 First we were late, so hope of catching story time was lost. We got separated on the subway since we didn't think to collapse our strollers, so Sam was a train behind me. (Over the course of the trip Sam got really sick of hauling strollers up and down stairs.) At Grand Central we admired the turquoise ceiling and then headed to the library... in the wrong direction. Anna was freezing and mad and hungry. (Our biggest lesson of the trip is this: don't take babies or toddlers to New York when it's freezing, snowy, icy, and windy.)

We got some pictures by the lions and headed to the childrens' section. They have the original Winnie the Pooh toys that were actually owned by Christopher Robin there, and Anna was excited to see those. Levi was excited to nurse and be released from his bear suit for a while. We found some picture books on the Statue of Liberty and Ellis Island and told Anna about her great-great-Grandmother Anna who saw that statue and came through that island when she came to America from Sweden. It was a sweet moment for me. 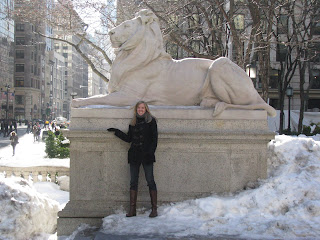 I am SO SO glad I brought these boots on the trip. They might have taken up half a suitcase, but they kept me warm and dry the entire time. 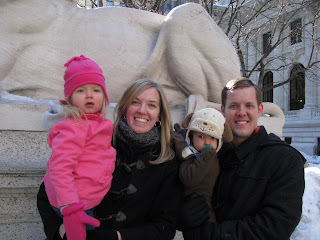 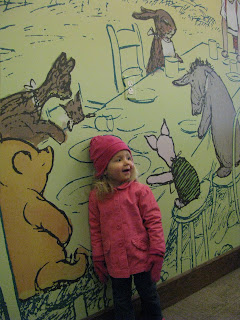 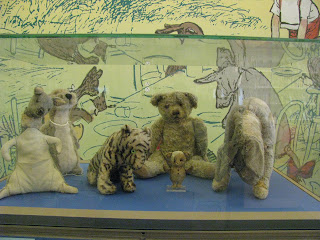 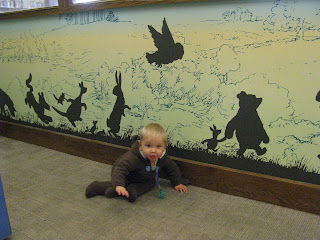 When everyone was recharged, we walked through Times Square and up Broadway, then over to Rockefeller Center. We got some pizza for lunch and the girls at the restaurant kept giving Anna samples of gelato. Sam then took the kids to watch the ice skating and I went into 30 Rock and had the security desk ring up my friend from high school, Katie Primm, who works on the breaking news team for NBC. They gave me a badge and I met Katie at the elevators. She took me around and showed me Brian Williams studio, and the news room, and tried to get me up to see SNL, but they were rehearsing. Though that was all very cool, it was mostly fun to see Katie doing exactly what she said she would when we visited NYC together our senior year of high school, 10 years ago. 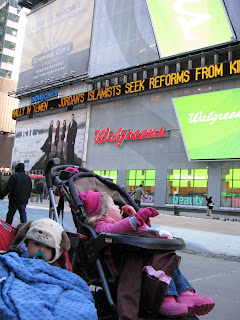 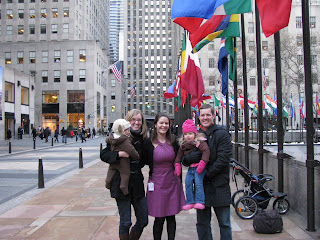 After Rockefeller, we popped in the Lego store and then headed up to FAO Schwartz. Anna played on the BIG piano while I fed Levi and then we wandered around the store. Anna colored a picture with crayons that fit on your fingers and the craft lady gave her a tissue paper flower. She designed a Barbie doll, and played with puppets, and was excited to see Fancy Nancy dolls. We let Anna pick out a few pieces of candy and then headed off to meet Jake for dinner. 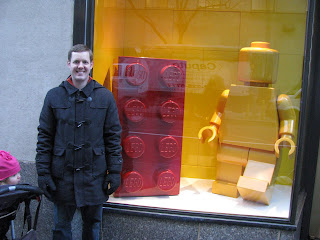 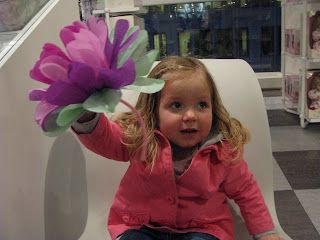 We got turned around, again, but finally met him, by which time both kids were asleep. We went to the Shake Shack for burgers (which lived up to their hype) and concretes (also delicious despite the fact that our hands were numb we had to eat them under heating lamps). Jake had to leave pretty soon afterward since he and some friends had won front row seats for Wicked that night. Sam and I were both feeling a little jealous, but both came to the conclusion that we'd been there, done that, had our fun while we were single and could travel, and now we're having a different kind of fun. 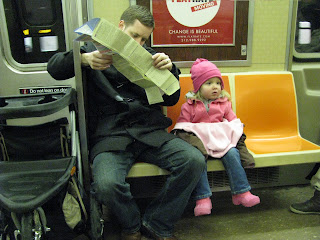 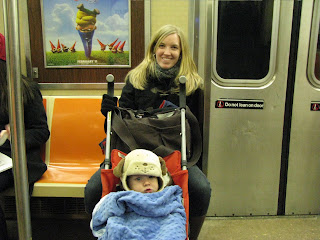 We made it home with just enough time for a quick swim before the pool closed for the night. Anna tried floaties on her arms for the first time and was gleefully giggly at being able to swim all by her self. It was definitely her favorite part of the trip.

On Friday we again ate our leisurely breakfast while all the Hilton kitchen employees cooed at our children. Once we got to Manhattan we wandered around the Financial District. We tried to take a picture at the bull, but it was surrounded by a tour bus full of Asians, so we went over to Ground Zero and were amazed at the construction progress there. From there we went to Wall Street and saw all the traders being treated to free food and games out on the plaza in front of the stock exchange. Then we headed back to the bull, but it was still encased in tourists, so we snapped a picture from across the street and hopped on the subway to go to PB & Co. for lunch. Their sandwiches were a little disappointing, but their desserts and PB hot chocolate were worth it. 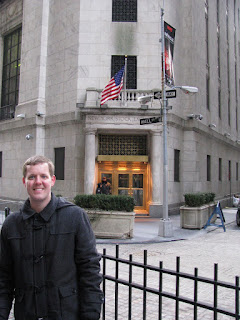 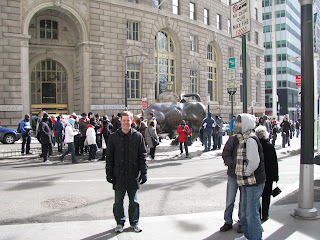 After changing Levi's blowout diaper we went to meet my friend Lizzie and her boys at the Manhattan Childrens Museum. The kids played and I thoroughly enjoyed catching up with Lizzie who I haven't seen since she got married and moved to Hawaii halfway through college. By this point Levi was looking exhausted and feeling a bit warm. Lizzie let me borrow her mei tei, but he wouldn't go to sleep. After a few hours, we bundled up the kids and rushed to Jacob's track meet. 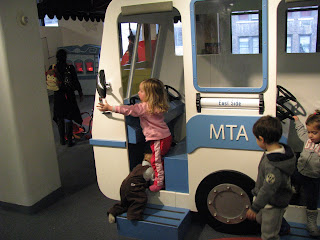 Anna and Oliver playing on the bus 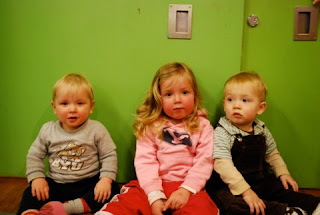 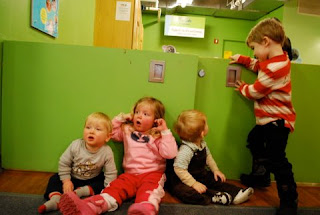 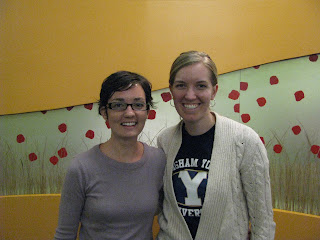 (check out Lizzie's blog The Mother Runner. It's full of inspiration, funny stories of life and running in New York [which I have a whole new level of appreciation for now], and delicious recipes. I'm currently enjoying soupfest!)

We arrived just a few minutes before his race and got settled in to a spot. Anna was enthralled by the runners. She has talked of nothing but running and racing since then. She wears some hand-me-down boy sneakers with shorts and a t-shirt (since that's what you wear to run, obviously) and runs all over the house. Sam and I love it.

Jake literally ran into us as he was warming up, so we wished him luck. He ran a great race and we all had fun cheering on him and the rest of his BYU relay team. It really was worth the whole trip to go be in a big cheering crowd watching someone we love do something amazing. 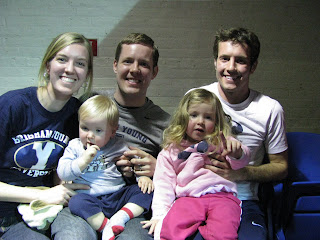 (Please excuse my crazy hair. I'm blaming it on a feverish baby. Please excuse the bad lighting. I had nothing to do with that.)


While Jacob was cooling down, I started getting worried about Levi who was burning up by this point. He slept for a bit while I held him and Anna jumped up and down the stairs in between races. Finally, we met up with Jake and a couple of his teammates to hunt down a Salvadoran restaurant for dinner. When we found it, we knew it had to be the right place from the bumping Latin music and folding tables.

Sam ordered us a heaping mound of pupusas and the girls working in the restaurant took turns holding Levi and playing with him. Sam said that when he was in El Salvador people would stop him all the time. It's apparently good luck to look into blue eyes in El Salvador, and babies with blue eyes (which happens occasionally) are nearly magical, so Levi was a hot item. We had a fabulous time eating without utensils and without distractions and enjoying the company of Jacob and his friends. On the way out, Sam even met someone who knew some of the people he'd met in El Salvador. 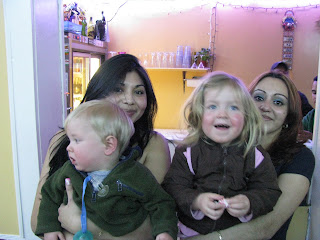 We left late, prayed and prayed during the train and ferry ride, and arrived at our parking garage half an hour after it closed. Still silently praying, a lone taxi drove by which we hailed and were getting into when the parking lot attendant said he'd open the garage for us. We thanked him profusely and found a ticket on our windshield waiting to be processed in the morning. We shoved that deep in the trash bag in our car and headed to CVS to get some tylenol for our feverish baby. We got to the hotel around midnight and everyone crashed into bed.

Then next morning we decided to just head home, but ended up driving over the Brooklyn Bridge and up Manhattan's west side on our way out of the city, so we got to see a few more sites. It was certainly a roller coaster of a trip with fun highs and some nasty lows, but we loved the ride and would do it again in a heart beat.
Posted by heather at 2:06 PM

You guys are so brave. Sounds like an awesome trip and one you will be glad you took. Fantastic photos! LY