March was a crazy month, and I still feel like I'm recovering a little from it. But so many fun things happened, I wanted to be sure I wrote about them. So, the next few posts will be a bit of March Make Up. Then we'll move to April and hopefully, someday soon, I'll be caught up.

In the first week of March, Anna and I flew to Cleveland to spend time with my parents, grandparents, sister, and niece who is only 4 months older than Anna. I had a wonderful time sharing mom stories with my sister and it was hilarious to see Anna and Elizabeth interact. Of course, they always wanted exactly the same thing. Elizabeth usually wanted whatever Anna was playing with, even if she had the same toy already. There was lots of intervention and soothing, but when they weren't fighting over toys, they were absolutely adorable together.

My dad liked to carry them both around at the same time and sing little songs to them. He's so gentle with babies and Anna always calms down when he walks her around. Elizabeth was old enough to start playing simple games while we were there and she was so fun to watch playing peek-a-boo, or rolling a ball, or doing actions along with songs and books that she knew. We miss her and Karen a lot.

We took the girls to the zoo and though Anna didn't really get most of it, she loved to watch the colorful fish swimming around and she got VERY excited about the little spry monkeys who were constantly running and swinging and wrestling with each other. 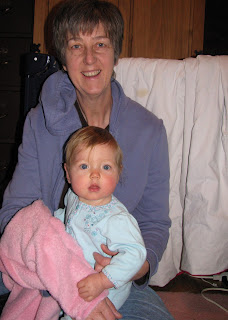 I wasn't very good about taking pictures while I was there, but on our last night, after Grandma played with and bathed and dressed Anna for bed, I got this picture to at least document that they had been together.

More pictures from our visit are in my "big B little B. what begins with B?" posts.
Posted by heather at 2:37 PM