Once again, I apologize for leaving such a gap in posts. I've decided that for me, pregnancy and blogging do not go hand in hand. Blogging is not always comforting to me and I find myself seeking comfort much more often these days. For example, I eat a lot more often now. It took me a while to figure out that my bad moods and headaches weren't so much the result of stress or hormones, but rather simply not getting enough food. Now, when I start to get irritable, I eat something and try to drink more water. It's worked wonders. I'm SO much happier. And still not gaining any weight, but that's not what this post is about....

I decided I would write about some other comforting things we've done lately since they make me happy in the moment and I think it's generally nicer to read about someone's happiness than their unhappiness, so here goes, with no specific order:

Last night I made tacos, Mom style. I made the taco meat just the way she makes it (with onions and canned pork and beans) and I got out cold canned corn to put on top of it. I also opened a food storage can of refried beans and added some salsa and cheese and got it all melty and warm. Delicious. I don't think I've eaten that since I was in high school. It brought back lots of fond memories, including a certain white plastic dish that Mom would always make it in.

Our home is officially Christmas-y. Our tree is up and decorated with gold ribbon, red and gold 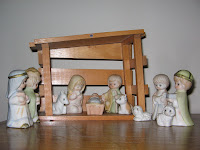 balls, and Sam's ornaments from his mom. Then we have twinkle lights around our big window in our living room, and a nativity scene on the coffee table. I put a little porcelain child's nativity on my dresser in our bedroom. I remember my Mom let me put in my bedroom once as a child and it's been "mine" ever since. It made me think about dressing up my dolls and doing their hair for Christmas and putting them around the nativity when I was a girl.

I read a book called Three Cups of Tea by David Relin and Greg Mortenson. It's about Mortenson's now life-long effort to build moderate schools in rural Pakistan (and now Afghanistan). He was climbing down to a village from a failed attempt to summit K2 when he got separated from his party, including his porter who had his tent and equipment. He spent a night in the cold, ate a protein bar he had on him, and back tracked his path to get back on the main road to the village when he took another wrong turn and ended up in a tiny mountain village. The people took him in, fed him, washed him, and got him back to his porter. He swore to them that he would build a school for their village someday. The rest of the book talks about the struggle to make it happen and the eventual success and support he found, even though he began to focus primarily on educating girls in an increasingly extremist Muslim area. The whole story is just one amazing incredible thing after another. I have to think that a man doing work like that must have had special protection from God. Needless to say, it made me happy to read about someone doing lots of good in the world.

I bought Double-fudge Brownie ice cream. It's one of my favorites and it makes some great milk shakes.

The other day I hurt my back at work. Usually, for this injury, I would take an anti-inflammatory and feel better, but they can cause birth defects, so I couldn't take it. Instead, that night I took a warm bath, read a book, stretched, and had Sam massage my sore spots. There's not a lot that's more comforting than that.

I'm trying to focus on all the positive and cool things about pregnancy, but when I'm having a hard time, these comforts REALLY help out. Here's hoping you can find a little comfort yourself this weekend.

the cool and positive thing about pregnancy, and needed to be remembered...is that it ends. and so does all the discomforts...smack dab right out of your memory. Same with childbirth...it's just a moment...sorta like our mortality. It really is just a moment. A special moment. but it's a moment. to be cherished and enjoyed and endured.

So have at it!

I made tacos Mom style tonight too! I've found that they freeze nicely, refried beans, corn and all (though not lettuce or tortillas), so it's a good make ahead freezer food.

As for being comfortable, Peter has started bringing the big comfy chair from the foyer into other meetings so that I can actually be in the same room as the speaker without feeling like I'm gonna die halfway through the meeting. Good luck!

I loved how you remembered a specific dish your mom made the tacos in. My mom has a special mac 'n' cheese that I've only made a couple times in my adult life and I always think of the 70's/80's era brownish pyrex dish she always made it in!

Glad you're finding comfy things during your pregnancy! :)

You know, it's kind of nice to hear that other people have pregnancy woes similar to mine. :) When I'm hungry these days, it's WAY more urgent than it used to be. I understand the frustration of not being able to take any medicine, too- I got a really bad cold two weeks ago that left me with headaches every day. Ick! And I also haven't gained any weight, even though I'm definitely eating more...and not exercising more. Good for you to remain positive. You're a good example to me! There really are so many things to be happy about, especially this time of year. By the way, your tree looks beautiful!