there is two of us

You may or may not have noticed that it has been one-day-shy-of-4-weeks since I last posted on this blog. It's not because there's been nothing to share. I could have told you, for example, that I've been called to be the adviser for the 14-15 year old girls at church, which will be LOTS of fun. Or, I could have written about how I started and finished the Twilight series by Stephanie Meyer in that time. I might also have shared that Sam's Grandpa Harold passed away (the funeral was very celebratory), that his sister passed the Texas Bar (HOORAY KATRINA!!!), or that his brother bought an iPhone. But I just couldn't bring myself to do it because there is one bit of news that has made all that seem too insignificant to write about in comparison.

And in case you haven't guessed it yet, here is that news:

Yay! I'm going to be a mom! Sam's going to be a dad! I have an excuse to quit work in a few months! (That's really exciting to me.)

I'm not sure what else to tell, so I'll just share some things I've been thinking about:

I've had a few pregnancy related dreams. In one, I was waking up in the middle of the night to go to the bathroom (nothing unusual) but found blood everywhere and knew I had miscarried-- that was scary, but thankfully, just a dream. In another dream, I had a very cute baby that was too small to be able to hold itself up, but it could talk just fine. It spoke in a whisper and said the alphabet and a few random words-- I don't remember well, but I think it might have sounded like one of the kids at work. Everybody commented on what a smart baby I had, but no one thought it was bizarre.

I'd like to give birth without pain medication. I don't like needles or IVs and I'd like to have control over my lower half once the birth is over. I'll think more about that as the time comes, but any books or techniques that anyone could recommend would be helpful.

I'm a little nervous, but mostly excited, and VERY grateful to have Sam supporting me and finding out all the information we need about insurance, and his time off, and which plans we could take advantage of to save money. It's nice to be taking this step as a family. I feel lots of sympathy for single moms.

To close, here's a picture of what I look like right now, mostly for comparison's sake in a few months. (Thanks for the birthday money Mom! Part of it went to buying that turtleneck.) 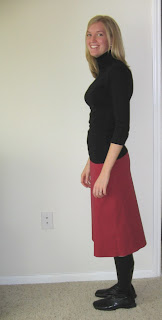 Fantastic news you two! We're so totally excited. For me its especially cool as I am studying embryology right now in addition to anatomy. It's pretty amazing stuff and definitely the miracle of miracles. It's also cool, because my instructor refuses to refer to even the little ball of cells by any scientific names like conceptus, embryo, fetus, etc., but instead calls it the "Little one". Anyway, that's great and exciting!

Congratulations! I totally support you in your efforts to give birth without pain medication. Books I recommend: The Birth Partner by Penny Simkin, Hypnobirthing by Marie Mongan, Ina May's Guide to Childbirth by Ina May Gaskin, Active Birth by Janet Balaskas. Those are some of the ones I read (although Active Birth I mostly just did the exercises).

I'm glad you are over the worst of the nausea (hopefully) and that you are having awesome pregnancy dreams. Dreams were a lot of fun for me. Something interesting: I thought (for no particular reason) that we would have a girl, but in all of my dreams before our ultrasound the baby was a boy. My subconscious was right. :)

Pregnancy is an amazing experience. I look forward to hearing more about it and your little one.

Yahoo!!! Congratulations you two! I'm so happy for you. Love, Lindsey Hipp

PS I love your outfit
PPS Hope you have more positive dreams!

Yay Heather!!! I've enjoyed being pregnant, but I'm getting to the point where I'm about ready to be done with it (less than 60 days now). I'd suggest getting lots of pillows of different consistancies for the bed. Sleeping comfortably has been my biggest issue.

Interestingly, the comment I get from most people is: You're sure not showing very much! Partly this is because I'm tall, and there's more room for baby between hips and ribs, but a lot of it is a optical illusion -- being tall means that proportionally the same size bump doesn't stick out so far, and I've also grown considerably on top (if you know what I mean) which makes the bigger bump seem smaller.

I remember Mom got many of the same comments about not being big, and I thought I'd let you know what you're in for.

Congratulations. I really wanted to go pain med free as well but ended up needing c-sections. My sister has had 3 without meds. When I talked to her about having mine without meds, she said the biggest thing is learning how to focus on something else whether its through breathing, mantras or something else. You just have to figure it out for you. Good luck. Its awesome having a baby no matter how they get here.

I'm not pregnant *yet*, but I also look forward to having a good excuse to quit work! :) I loved that you made that comment! I totally feel the same way!

hooray and congratulations. After 5 let me share one thing...stand up straight and keep sucking in the abs until you absolutely can't. Will help with breathing and the body after delivery. Have to say I hope you have a girl first. But I always hope that for everyone.

I totally recommend HypnoBirthing. I was able to do 23 hours drug free!! While just reading the book is helpful, taking the class (though a little pricey) is So much more helpful!

I also recommend the poem I made up for Karen to sing to herself whenever she got weirded out by people's comments:
Rump-a-dump dump
I've got a baby bump
Lump-a-dump dump
Baby baby baby

As often as possible, a little bum dance is advised to go along with this. Oh, and I recommend you send me a video of you doing that.

Congratulations guys! You are due just a week before me (I'm actually due on the 11th of June). I used hypnobirthing tapes with Alexa which helped a ton with giving birth naturally. I think the main thing for me was that they calmed me down, helped me to focus, and reassured me that my body knew what it was doing. I highly recommend a doula; and make sure you have lots of positive, happy energy in the delivery room. Congrats again!