the sound of freedom

Sam and I were looking through our modest music collection to create a patriotic playlist. Here's what we could scrounge, with our justifications for including it on the list: 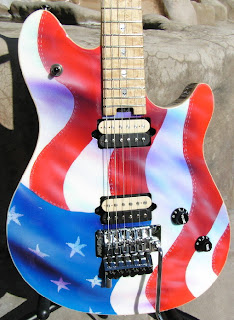 Take Five Dave Brubeck
-- Jazz is, as I'm sure you know, the only true American art form

Take Me Home, Country Roads John Denver
Sweet Georgia Brown Louis Armstrong and Edmund Hall
Big River Johnny Cash
The Only Living Boy in New York Simon and Garfunkle
Sweet Home Alabama Lynyrd Skynyrd
--These songs refer to specific places in this our fair home- West Virginia, Georgia, the major points along the Mississippi River, NYC, and Alabama respectively- and they do it with flair

Home Michael Buble
-- My anthem during my last few weeks in London. In essence, "I've been all over Europe and it's been great, but what I really want is to come home to somebody who loves me." Since that home happens to be America, we included it.

I Love The Lord BYU Men's Chorus
-- This probably is a little unfamiliar to most of you. It's the song the BYU Men's Chorus sang at April General Conference Priesthood Session. We LOOOOVE it. Since it was first performed in America, we let it stay.....I mean, it's our list.

If you want more patriotic music, there's a lot of it available for free on the internet. Go to Alta Vista's audio search page, and type in the name of a song you want.

You'll get a lot of people posting other people's music, which you shouldn't keep--though a single download and listen then delete is generally considered OK to make sure it's the song you're looking for before you go somewhere legit to buy it.

On the other hand, there's also lots of sites where the original artist is giving away the song. Sometimes as a sample, or holiday gift, other times because they don't really expect to sell anything because they're just an accomplished amateur. High school choirs and marching bands do this a lot, and I find that if they're good enough to take the time to record, they're also often good enough to listen to, and it's a great way to expand your madest music collection with old songs you like, but don't have a specific recording you're looking for.

I know it's too late for July 4th this year, but I have lots of this kind of music that I downloaded legally from artists sites, and I'd be glad to burn anyone in my family a CD of what I have for any occasion you wish to name.