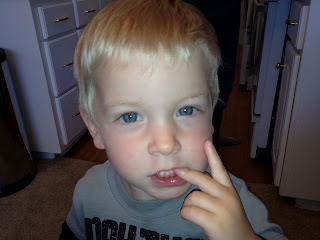 Sam's parents were visiting earlier in the month, so we had a little party with them. Anna helped me make the cake, and Levi "helped" me frost it. 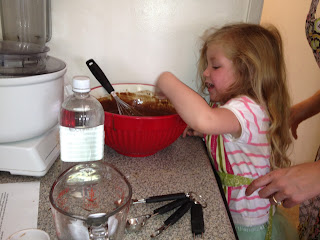 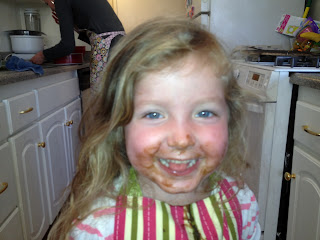 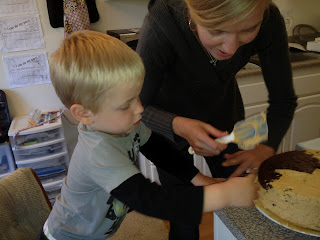 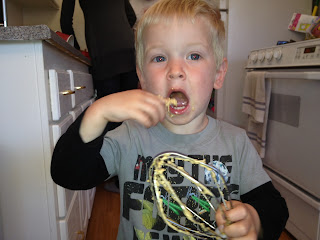 Levi loves trucks (and really any vehicle) so we made a construction truck cake. There was supposed to be a digger on it, but we only had a tow truck. Thankfully, he's two, and thought it was awesome nonetheless. 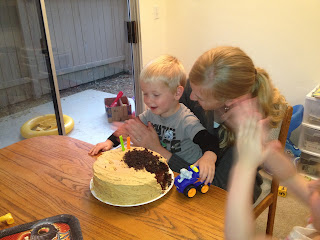 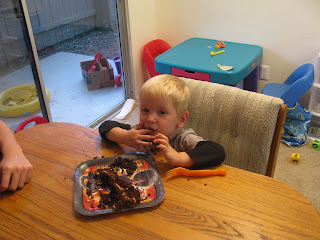 Grandma Ruth brought two big trucks, a dump truck and bulldozer along with some foam blocks to bulldoze and dump. I wish we had better pictures of Levi’s face when he opened them because he was SO excited. He plays with them ALL the time. 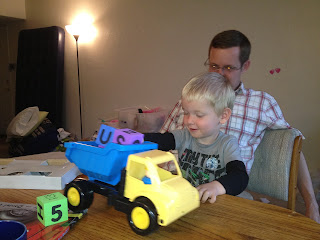 Levi’s real birthday fell on a Sunday, so he wore this adorable little outfit we got for him. Sam’s always wanted to buy a little blazer for Levi, so when I found them at Target, we went for it. 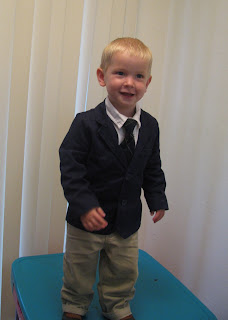 Later that evening, we had some friends from church over, including his little friend Brooklyn. If Levi and Brooklyn spot each other in church, the whole congregation will know it as they say hello to each other.

We’ve done quite a bit of “making do” here in California, and our wrapping paper has been Anna’s paintings on packing paper, tied up with yarn and hair bows. In the packages here are some dinosaur pajamas (seen in the last photo of the post- they're a favorite), a Curious George DVD (which got a huge reaction from both kids), a set of Cars books we got at the library booksale, and a Mater hot wheels car. 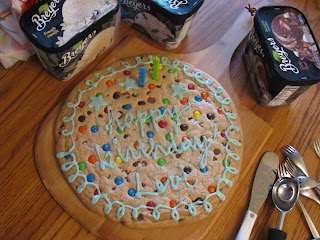 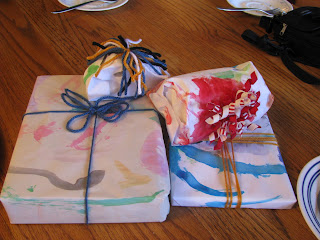 After Levi’s birthday, Grandma Becky and Grandpa Randy brought him this race track which got constant usage for about a week and still gets used at least once a day. 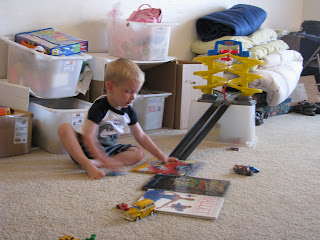 We love our little two year old and how funny he is. He still loves to laugh and frequently asks for tickles or spins. He likes to play dragons or dinosaurs or rocket ship (or some combination of those) with Anna and Daddy. I’m glad he still loves to read with me and will bring over book after book and sit in my lap where I can steal the kisses and cuddles that are harder to come by these days. He’s talking more and more and is starting to make jokes which we love and are surprised to hear from his little baby voice. Aside from the usual two-year-old meltdowns over the wrong color bowl or mistakenly cut banana, Levi is an easygoing kid who is a pleasure to have in the house. Happy Birthday, Buddy! We love you!
Posted by heather at 12:02 AM

He was just 4 weeks? old when we met him in Texas. I love looking into those beautiful Stay blue eyes. Oh, OK, maybe they're Cosby blue,2!
Mary Beth

Levis is so big!!
We're dying for y'all to get back here to Cambridge!

What a sweet little guy! He's looking so old.