In April, I took the kids to Utah to visit my parents for a week. Traveling was not fun. Layovers with 2 kids are nightmares. Being delayed 2 1/2 hours because a luggage cart runs into your plane is only now laughable because a friend from Texas happened to be on our same flight out of Phoenix and she helped me manage my kiddos as they dissolved into over-tired oblivion in the middle of the airport. But enough complaining. Here's the fun we had: 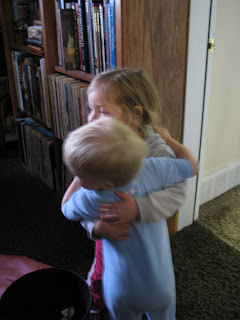 We planned our trip to be there while my sister-in-law Rachel and nephew Elliott were visiting and Elliott was SO excited to see Anna and Levi. I can still hear his little voice asking for them whenever he couldn't see them.
"Anna? Wevi?" 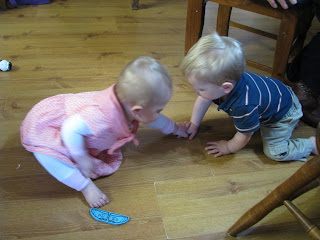 Levi and Bridget showed affection by grabbing each others faces. We didn't get to see as much of Karen and her kids as we would have liked since they all got nastily sick :( Karen did give us two of our favorite books for birthday presents though! Thanks Karen! 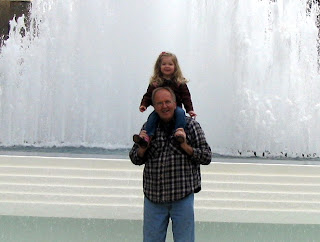 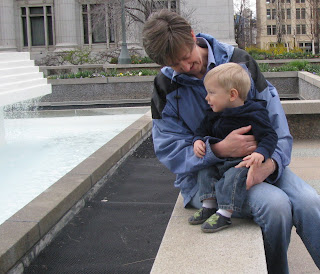 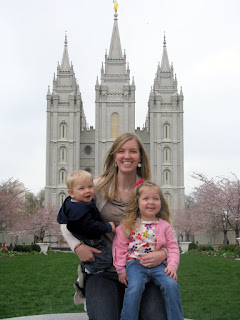 We visited Temple Square and then the zoo 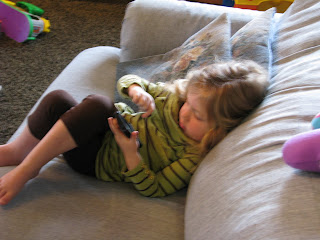 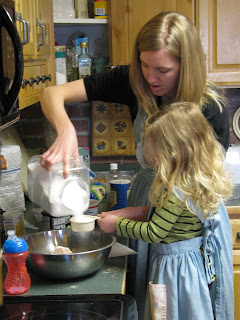 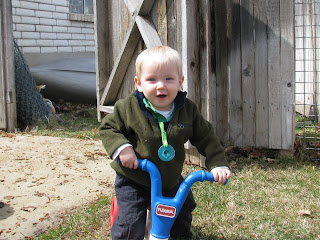 Levi was so happy to be riding a bike like the big kids. Though while outside his eyes started gooping up. We thought it was allergies but when it didn't clear up, we took him to the doctor. He had pink eye and an ear infection. Luckily, the pink eye medicine sample guy had come to the instant care center that morning, so we got plenty of eye drops for the whole family and some antibiotics for Levi. 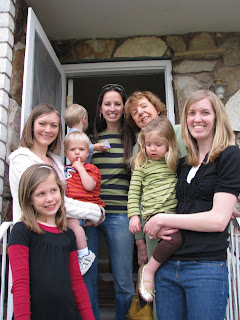 I was happy to have a visit from my beautiful and fun cousin Martha (who I absolutely adore), her kids, and my great-Aunt Shirley who was impressed that Anna knew what a cowl neck was.

Another memorable event was going swimming at the Springville pool. Anna was simply giddy with glee. (She has been asking to go swimming since February, at least. We kept telling her that we'd go when it got warmer, but that wasn't really working for her, so I told her that when all the trees have leaves on them, we'll go swimming. She went on the back patio a couple weeks ago and said, "Mama! The trees have leaves! It's time to go swimming!") She literally giggled for the entire hour we were at the pool and swam and splashed and played her little heart out.

And the next night we got to eat dinner at Brick Oven with Sam's brother Jacob and his beautiful fiance Lauren. Though Anna acted really shy for most of the time, after we left, she couldn't stop talking about Lauren and how "she is a good job at soccer" and how she is going to marry Uncle Jacob in the temple. We are all so happy that she is joining the Cosby family.
My favorite part of the trip was how little whining I heard from Anna! There are just too many fun toys and games and attentive relatives at Grandma's house to ever have to resort to whining. In the evenings, Rachel and I enjoyed watching North and South, talking, and seeing pictures from Mom's trip to Israel. It was nice to spend some time with her and get to know her better. Despite all the inconvenience and sickness, it was well worth the trip and was a much needed break for me. Thank you Mom for letting us come and and relax and have fun!
Posted by heather at 9:24 PM