Now gone
Beyond the limited horizon
Of our mortal view.

Leaving us
In dark sorrow
And chill loneliness--

But sheds warmth and light
On dear souls gone before
--Jesse E. Stay

That poem was written by my grandfather, Jesse Eldred Stay, who died this morning at 7:13 AM. Many of his children were with him and said he died peacefully, for which we are grateful. Here are a couple of eloquent tributes to him from my cousin and sister, but I felt like I should add my own memories.

I found out when I checked my email this morning and sat quietly for a moment, waiting for a sense of shock or for tears, but none came. I just couldn't be sad about a life well-lived. Grandpa would have been 87 next month and I don't think I know anyone personally whose had a life as full as his. He was a WWII hero, flying over 40 missions as the pilot of a B-24 bomber. He lived all over the country and world in his career with the Air Force, earning a masters degree, working in the Pentagon, and retiring as a Colonel. He was a Bishop, Stake President, Mission President, member of the LA Temple Presidency, and Patriarch. My maiden name, Stay, was recognized everywhere I went and I was often asked if I was related to Jesse Stay. I was always proud and happy to answer that I was his granddaughter.

People may have met my grandfather because he held important positions, but they remembered him for his kindness, humor, and generosity. I heard countless stories from people I met about how as their bishop, or neighbor, or mission president, he had rendered some great service, or given wise counsel that was never forgotten. I've often spoken of what a Christ-like man my own father is and I have no doubt he learned how to selflessly love and serve from his own father.

Unfortunately, I didn't know my grandpa very well. We lived across the country from him during my childhood and rarely got to see him. When we did, it was often at family reunions and there wasn't much one-on-one time with grandpa when he has 50 grandchildren to give attention to. However, I did spend two Christmases at my grandparents' house in Huntington Beach, CA while I was in college and loved being with and learning from my grandparents then.

Always, on our first morning there, Grandpa would make his famous pancakes and freshly squeezed orange juice from his own orange tree. There was always more than we could ever eat and grandpa would tell stories of his childhood, or of my dad as a child. Then he'd send us off to the beach stocked with sand toys, boogie boards, towels, and hats.

After spending the whole day at the beach, we'd come home to a warm dinner. Grandpa never ever let anyone do the dishes. Often, he wouldn't even let me put my dish in the sink. He said it was because he liked things put in a certain way in the dishwasher, but really, he just liked to be the one who was doing the work. He always had to be serving.

In the evenings, we'd tell more stories, or watch movies. Grandma and Grandpa always had ice cream for us. I remember one evening, Grandpa asked Grandma if she would like a bowl. She said yes she would, but that she would get them both a bowl. Grandma scooted forward to push herself out of the couch, but Grandpa just grabbed her by the hips and pulled her back down. At 84 though, Grandpa wasn't quick enough to get off the couch before Grandma was the one pulling on his hand to pull him to the couch while propelling herself upwards. They just kept pulling and giggling and teasing like a couple of newly weds. Their only argument was over who got to serve the other.

And that's what I remember most about my Grandpa: laughing at his bad puns and silly jokes while he cooked for us, or cleaned up after us. I never really saw him excelling in any of his high status roles, but I know I saw him succeeding in his most important ones as husband and father. I love him and will miss him, but I will always be grateful for the legacy of love and service he left behind. 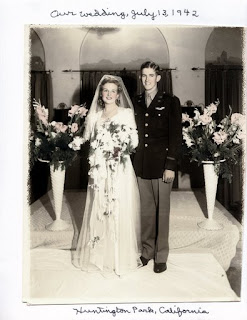 Heather - I am so sorry to hear about your grandpa passing, but glad to hear he was wuch a wonderful man who lived a marvelous life. Let me know if you need anything!

That is so sad. I am so sorry.
Interesting to hear about your Grandfather's activities. My Great Grandfather, who passed away 8 years ago, worked a lot at the L.A. Temple. He managed the grounds and helped build it. While growing up in L.A. when I would tell other LDS people that I was a Barlow, they would shout immediately that they know good ol Grandpa E. Garrett.
Pretty similar to you. Again, hope things get better in that regard. Our best.

I am so glad you had a grampa you could tell stories about. One who you know loved you and who you could love in return. Perhaps the distance makes the loss a bit easier. I am sorry your dad wasn't there at the moment Jesse decided he was done in this mortality. I just said to your dad on Sunday that I hoped he could handle the grief better than I've been. Your mom agreed with me that when the actual time came, it might not be so easy. It never is!

Heather,
I share your loss. Your Grandpa is my Uncle on my Mother's side. I will miss him greatly. He was my WWII hero. He was truly a great, humble servant of our Heavenly Father. I know he will be there to greet us all with open arms on the other side. May God give you and all your family peace and solace.
Bob Rokes