there's a place for us

Today is the 50th anniversary of the Broadway premier of West Side Story. Congratulations!

I've always loved the musical, I think in part because my Dad loved it. I've also known that it 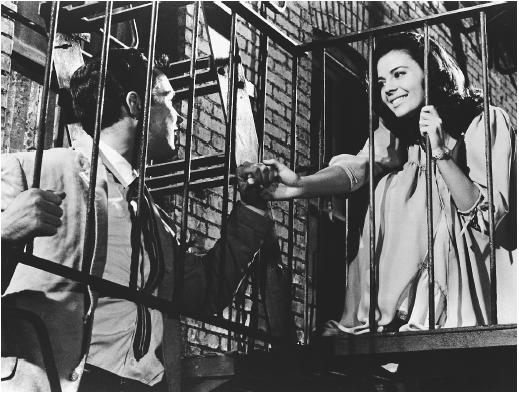 was groundbreaking for lots of reasons, including its focus on race and gang violence. But in the last month, I've heard two stories on NPR, one on the Houston local station, and one on All Things Considered, that have taught me more about the actual music of West Side Story.

On the local show, a visiting pianist played his arrangement of the overture. He then talked about how recognizable the songs of WSS are. He said, "You know within the first few notes that it's a tune from the musical." I had never thought about it before, but I realized after he said it that it was true. The whole musical has a unifying theme to it that makes it so memorable and classic that other, lesser musicals lack. The pianist said it was because Bernstein based the entire score on one interval, known as the "tritone." Hum the three notes of "Ma-ri-a..." That's a tritone. It's called the devil's interval and was banned from use until recently in the Roman Catholic Church (according to the pianist...).

Bernstein took the tritone and inverted, reversed, mirrored, and tinkered with it in other ways to form the base of each song. Even the gang members' whistle to each other is a twist on the basic tritone. The pianist played all the variations of it on the show, and if you listen to the program I linked to above from All Things Considered, you'll hear something similar.

Needless to say, I was impressed. What genius! The musical was reportedly met with good, though not raving reviews, partly because of its complexity, more akin to opera than to the popular musical of the day, like the Best Musical Tony Award winner the same year, The Music Man.

I decided I needed to blog about this because it's so exciting to me. I wish I could convey how cool I think this is! I once had a discussion with a friend about the merit of knowing about an author's personal life-- whether that knowledge added to what you gained from the content, whether it added depth or limited the possibilities for interpretation. I'm still ambivalent about that particular argument, but I have decided that learning interesting tidbits like this one make life much more interesting and inspire me to learn, create, and enjoy.

That is really cool. I'm going to have to see if the library has WSS on DVD so I can see it again.

It's always nice to get a little bit more context to artworks. It makes them so much more interesting.

Thanx Heather...great blog entry. And I understood that last bit your wrote. Years and years ago, we heard we could get FREE tickets to a special Karl Haas concert at Severance Hall so we ran into N.Olmsted picked up 4, invited my folks and on that night, sat for probably one of the most amazing nights we have ever been to. Karl was amazing..and the stories he told about composers' lives and their compositions sent up to the moon and back. Life was never the same afterwards.

If you ever get a chance to see WSS live on stage, grab it. Randy and I saw it YEARS ago in Detroit - on the huge Masonic stage where I saw my first MET opera (Barber of Seville). I don't know if the staging was unusual or written into the script, but while Maria and Tony sing "There's a Place for Us, Someday ..." in a tenement on one side of the stage, ALL the gang members who had died - and some still living - performed an awesome ballet - all dressed in white - on the other side of the stage. Ethereal. Depicted the millenium/spirit world better than ANY Mormon drama I've seen. Of course, I cried.